A Network for the Heartland and Beyond 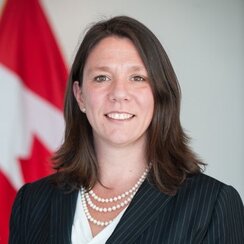 Canadian Consul General Rachel McCormick
McCormick told the fellows that Canada has a "vast and diversified" portfolio of energy resources, both renewable and hydrocarbon based. The energy markets make up a large part of the country’s GDP and provide many jobs, she said, yet the Trudeau government understands the importance of working on climate change.

“Ottawa estimates the economic impact of climate change could be $43 billion a year over the next 20 years in Canada — so we know we have to work to reduce our greenhouse gas emissions,” she said.

McCormick said 80% of Canada’s electricity now comes from renewable energy; the goal is to expand that to 90% by 2030. And she emphasized that Canada takes a science-based approach to its decision-making on climate change.

“We have to work together as countries, so we are very committed to a strong multilateral approach to global issues, whether it’s the pandemic or climate change,” she said, noting Canada remains committed to the Paris Climate Agreement. Canada is also leading the charge on the issue of plastics pollution and is hosting the World Circular Economy Forum next year.

McCormick said the Canadian government always puts the focus on the economy and the environment working together “for potential jobs, the potential for growth, the recognition of the huge global market that is being created for green tech — and the role that Canada could play in leading that.”

McCormick told the fellows: “I’m pretty confident that you are going to be the people that we need to take on these challenges. I’m sure we’re going to be counting on you as world-changers in the near future.”
​McCormick was joined by other Canadians on the panel to talk about the transition to a sustainable society and the challenges that must be overcome. They emphasized that making the transition from conventional to renewable energy requires building a bridge between the old and new.

Annable described the aims of the Canadian government as efforts to reduce emissions, transform the energy sector, and reimagine how the workforce would look during that transition.

The panelist highlighted the legally binding milestones related to the reduction of carbon emissions in Canada and the need for international efforts to address the transitions in the energy sectors, such as helping the vulnerable workforce of the coal-power companies. Power companies influence the economic development of a country, they noted, therefore strategic planning that combines new skills and policies must be considered.
​
“We need a paradigm shift in the way we think and the way we live,” Arastoopour told the fellows. He talked about three intersectional plans that must include economics, the environment, and the social sphere. The future must connect a multitude of fields as the energy revolution is going to occur gradually.