Addressing the Battery Recycling Challenge
by Argonne National Laboratory
Recycling a lithium-ion battery is not as simple as recycling a cardboard box or an aluminum can. However, the benefits of recycling lithium-ion batteries are considerable, both from an economic and a national security perspective. As the United States tries to reduce its dependence on foreign sources for both batteries and the raw materials needed for their construction, as well as to diminish environmental impact of spent batteries, scientists and industry leaders are looking for new ways to recycle and recover lithium-ion battery components. 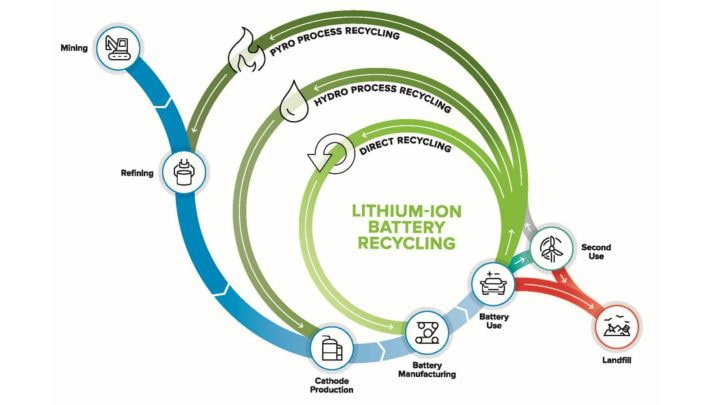 The meeting drew representatives from a wide range of companies that focus on different parts of the battery life-cycle. Attendees from automotive original equipment manufacturers (OEM) for instance, are not directly involved in the recycling process but need to make sure that there are available pathways for their batteries to be recycled. Other attendees represented battery recycling start-ups, materials suppliers and battery manufacturers, among others.
According to Spangenberger, electric car owners are unable to simply recycle their batteries at the end of their vehicle’s lifetime; they must pay for a service if they choose to do so. The potential of direct recycling technology, which seeks to convert spent batteries to higher-value products as opposed to the current products of lesser value, could offer a more cost-effective way to reuse batteries than today’s methods. ​“Using direct recycling and cathode upcycling could enable us to get twice as much value from a recycled battery as older techniques,” he said.

Argonne is demonstrating these new direct recycling technologies to determine if the techniques could be viable on the industrial scale. ​“There are numerous challenges that we’re working through to show that it can be done so industry sees the opportunity and can take it through to commercial practice,” Spangenberger said.
​“Recycling of batteries is a crucial component towards achieving the DOE’s near-term cost targets for batteries. The ReCell Center takes a comprehensive look at recycling each battery part, and more importantly at how these different processing streams fit together seamlessly without compromising quality of the recovered material,” said Shriram Santhanagopalan, a battery scientist at the National Renewable Energy Laboratory.

“The sheer magnitude of the potential market makes battery recycling a worthwhile investment,” added Ginger Rothrock, a venture capitalist with the Heritage Group. ​“Keeping an eye on recycling efforts is really important to us strategically, because we see crucial technologies being developed by ReCell and related startups being something that we’re interested in supporting. As a venture capitalist, from the financial side, I see investing now for the future being a huge opportunity.”
Reprinted with permission. Read the original article.