Plan B - Geoengineering
More Scientists Now Say It Must Be An Option
by Fred Pearce
​Once seen as spooky sci-fi, geoengineering to halt runaway climate change is now being looked at with growing urgency. A spate of dire scientific warnings that the world community can no longer delay major cuts in carbon emissions, coupled with a recent surge in atmospheric concentrations of CO2, has left a growing number of scientists saying that it’s time to give the controversial technologies a serious look. “Time is no longer on our side,” one geoengineering advocate, former British government chief scientist David King, told a conference last fall. “What we do over the next 10 years will determine the future of humanity for the next 10,000 years.”
​David King helped secure the Paris Climate Agreement in 2015, but he no longer believes cutting planet-warming emissions is enough to stave off disaster. He is in the process of establishing a Center for Climate Repair at Cambridge University. It would be the world’s first major research center dedicated to a task that, he says, “is going to be necessary.” Technologies earmarked for the Cambridge center’s attention include a range of efforts to restrict solar radiation from reaching the lower atmosphere, including spraying aerosols of sulphate particles into the stratosphere, and refreezing rapidly warming parts of the polar regions by deploying tall ships to pump salt particles from the ocean into polar clouds to make them brighter.
​United States scientists are on the case, too. The National Academies last October launched a study into sunlight reflection technologies, including their feasibility, impacts and risks, and governance requirements. Marcia McNutt, president of the National Academy of Sciences, said: “We are running out of time to mitigate catastrophic climate change. Some of these interventions… may need to be considered in future.” The study’s prospective technology includes research by David Keith, a Harvard University physicist who has developed his own patented technology for using chemistry to remove CO2 directly from the atmosphere, and Kelly Wanser of the Marine Cloud Brightening Project, which is studying the efficacy of seeding clouds with sea salt and other materials to reflect more sunlight back into space. The project is preparing for future field trials. China too has an active government-funded research program. It insists it has no current plans for deployment, but is looking, among other things, at how solar shading might slow the rapid melting of Himalayan glaciers.
Geoengineering the climate to halt global warming has been discussed almost as long as the threat of warming itself. American researchers back in the 1960s suggested floating billions of white objects such as golf balls on the oceans to reflect sunlight. In 1977, Cesare Marchetti of the Austria-based International Institute for Applied Systems Analysis discussed ways of catching all of Europe’s CO2 emissions and injecting them into sinking Atlantic Ocean currents. 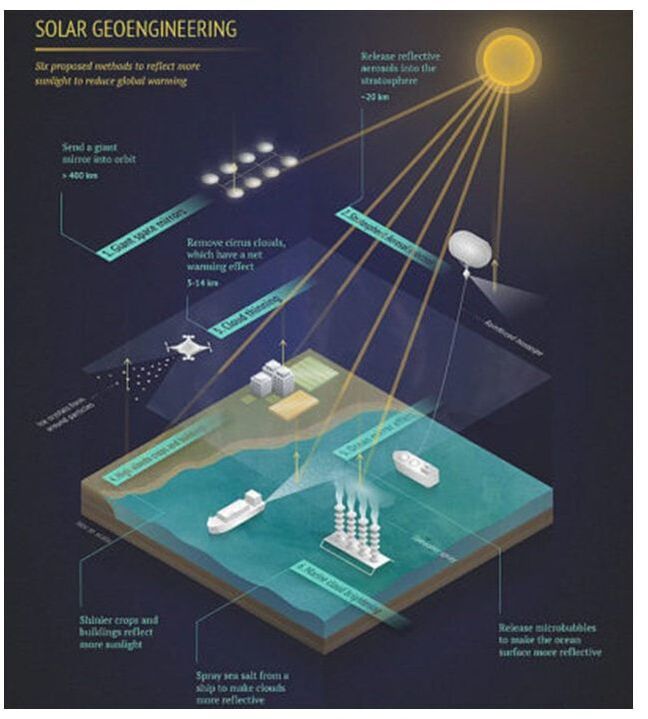 ​In 1982, Soviet scientist Mikhail Budyko proposed filling the stratosphere with sulphate particles to reflect sunlight back into space. The first experiments to test the idea of fertilizing the oceans with iron to stimulate the growth of CO2-absorbing algae were carried out by British researchers in 1995. Two years later, Edward Teller, inventor of the hydrogen bomb, proposed putting giant mirrors into space. Still, many climate scientists until recently regarded such proposals as fringe, if not heretical, arguing that they undermine the case for urgent reductions in greenhouse gas emissions. A group of scientists writing in Nature as recently as April last year, called solar geoengineering “outlandish and unsettling… redolent of science fiction.” But the mood is shifting. There is broad, international scientific agreement that the window of opportunity to avoid breaching the Paris climate target of staying “well below” 2 degrees Celsius (3.6 degrees Fahrenheit), is narrowing sharply. A pause in the rise in CO2 emissions that brought hope in 2015 and 2016 has ended; the increase has resumed at a time when we should be making progress toward a goal of halving emissions by 2030, says Johan Rockstrom, science director of the Potsdam Institute for Climate Impacts Research. CO2 concentrations in the atmosphere – the planetary thermostat – are now at 415 parts per million (ppm) and rising by almost 3 ppm each year, reaching levels that have not been seen in 3 million years. “We have two years left to bend the curve” downward, says Rockstrom.

Some experts contend we may be approaching a moment when nothing other than geoengineering can meet the international community’s promise – made when signing the UN Climate Change Convention at the Earth Summit in 1992 – to prevent “dangerous anthropogenic interference with the climate system.” Myles Allen of Oxford University’s Environmental Change Institute says: “Every year we are not even trying to reduce emissions is another 40 billion tons of CO2 dumped into the atmosphere that we are blithely committing future generations to scrub out again.” Possible geoengineering schemes and schedules are now being discussed. Take this plan published last fall by Gernot Wagner, executive director of Harvard University’s Solar Geoengineering Research Program:
In 15 years’ time, as the impacts of warming worsen, planes loaded with sulphate particles start taking off from airfields around the world.
They fly to 65,000 feet, well above existing air lanes, and spray their loads into the stratosphere:  4,000 flights in the first year, 8,000 in the second, 12,000 in the third, and so on until, after another 15 years, fleets of ... high-altitude tankers are making 60,000 flights annually.
The thickening shroud of particles would fight climate change by mimicking the output of volcanic eruptions that deflect solar radiation streaming into the atmosphere. Famously, the eruption of sulphate particles from Mount Pinatubo in the Philippines in 1991 caused a global cooling of up to 0.6 degrees C for the following two years. The planned 15-year human-made “eruption” would shave 0.3 degrees off warming, halving the likely increase during that time. The sulphate spraying would, Wagner and a co-author said, be “remarkably inexpensive,” at not much above $2 billion a year over the first 15 years of deployment. Much cheaper than actually cutting emissions. So mission accomplished? Not quite. In fact, arguably not at all.
Geoengineering is defined by the Oxford Geoengineering Program as “the deliberate large-scale intervention in the Earth’s natural systems to counteract climate change.” There are two main types. One is shading the earth from solar radiation, of which the shroud of sulphates in the stratosphere is emerging as the quickest, most effective, and least costly. The other is to remove more CO2 or other greenhouse gases from the atmosphere than nature currently achieves – so-called negative emissions. Right now the oceans absorb a lot of CO2. One way of helping them take more is likely to be on the Cambridge unit’s agenda. It involves seeding the oceans with iron to stimulate growth of marine algae. The resulting algal blooms would, the theory goes, soak up CO2 from the water and cause more to be absorbed from the atmosphere. Concerns range from the effects that such blooms of algae could have on the marine food web to uncertainty about whether such local absorption would actually increase the ocean’s total uptake of carbon.

A second, more measurable idea involves removing carbon from the atmosphere, either by the massive deployment of devices to extract CO2 from the ambient air – known as direct air capture – or by more natural methods. One of those would be to turn large areas of land over to carbon-absorbing crops, probably trees. The harvested biomass could then be used as fuel in power stations, and the emissions from burning them reabsorbed by new crops. The net emissions could be zero. If biomass burning were combined with technology to capture and bury the carbon emissions from the power plants – delivering a technological combo known as Bioenergy with Carbon Capture and Storage (BECCS) – emissions could be negative. In theory, the more you burned, the more CO2 you would suck from the air.

The UN’s Intergovernmental Panel on Climate Change (IPCC) enthusiastically adopted BECCS in its fifth assessment, published in 2014. It said most scenarios for keeping warming below 2 degrees would require “the availability and widespread deployment of BECCS and afforestation in the second half of the century.” It could happen. Biomass burning is increasingly popular in power stations. And carbon capture and storage (CCS) is a proven technology, though not yet adopted at scale. That could soon change, following the announcement this month that industrial emitters in the European ports of Rotterdam, Antwerp, and Ghent plan to join forces to pump 10 million tons of CO2 a year into adjacent offshore gas fields. But critics say the problems with BECCS are manifold. The land requirement would be huge. And the forests created to provide the fuel would be monocultures of fast-growing tree species like eucalyptus and acacia. If the land were taken from farmers, then who would feed the world? And if it were taken from existing natural forest areas, the carbon benefits of BECCS would largely disappear, says Simon Lewis of University College London. That’s because plantation forests typically hold only 5 percent as much carbon as mature natural forests.

Maybe there is a simpler solution. Maybe the most promising answer lies in going back to nature – in restoring natural forests. A broad coalition of environmentalists – from those who embrace corporate environmentalism, such as The Nature Conservancy (TNC), to the British anti-capitalist columnist George Monbiot – have recently endorsed this “natural” climate solution. Their touchstone is a 2017 paper by Bronson Griscom of TNC and 24 others, which concluded that a third of the measures required between now and 2030 to keep the world on track to stabilize climate could be achieved cost-effectively by boosting natural ecosystems. They could take an extra 11 billion tons more CO2 out of the air each year. This could be done mostly by reforestation, but also by better soil management, the protection of carbon-rich wetlands such as peatlands, and growing more trees on farmland. Proponents see this not as a substitute for emissions reductions, but as a “biological bridge… to a zero-emissions economy.” The plan fits the Oxford definition of geoengineering, though they avoid using the term. The scientific case for this route is compelling. Most of it could be achieved on existing damaged and degraded forests. The World Resources Institute estimates that globally there are 7.7 million square miles of forests degraded by logging or shifting cultivation that could be restored. That is an area twice the size of Canada.

It looks like it could be a win-win, delivering a climate payoff on the scale of geoengineering without any of the downsides. Tim Lenton of Exeter University, a proponent of research into geoengineering, says it could be an ideal solution. “I am against introducing new forcings such as sulphate aerosol injection in the stratosphere,” he says. “But I am in favor of emulating and enhancing natural feedback loops and cycles, such as regenerating degraded forests.” It would, he says, strengthen the biosphere’s natural forces of self-regulation that British scientist James Lovelock has termed Gaia. Lenton has a new term for what is required. Not geoengineering, but Gaia-engineering.


The above article has been republished with permission from Yale Environment 360.

Author Information: Fred Pearce is a freelance author and journalist based in the U.K. He is a contributing writer for Yale Environment 360 and is the author of numerous books, including The Land Grabbers, Earth Then and Now: Amazing Images of Our Changing World, and The Climate Files: The Battle for the Truth About Global Warming