Carbon Loophole: Why Is Wood Burning Counted as Green Energy?
by Fred Pearce
Wood burning is booming from Britain to Romania. Much of the timber is sourced locally, which is raising serious concerns among European environmentalists about whether every tree cut down for burning is truly replaced by a new one. But Drax’s giant wood-burning boilers are fueled almost entirely by 6.5 million tons of wood pellets shipped annually across the Atlantic.

The debate is not clear-cut. Burning wood may be close to carbon neutral in some situations, such as where it is clear that cut trees are replaced with the same trees, one for one; but in others it can emit even more carbon than coal. The trouble is that regulators are ill-placed to tell the difference, which will only be clear decades after the presumed emissions have been tallied — or not — in national carbon inventories. The one certainty is that if things do not go according to plan, Europe’s promises for meeting its Paris climate commitments will go up in smoke. And the U.S.’s own CO2 emissions could resume their upward path even quicker than President Donald Trump intends. 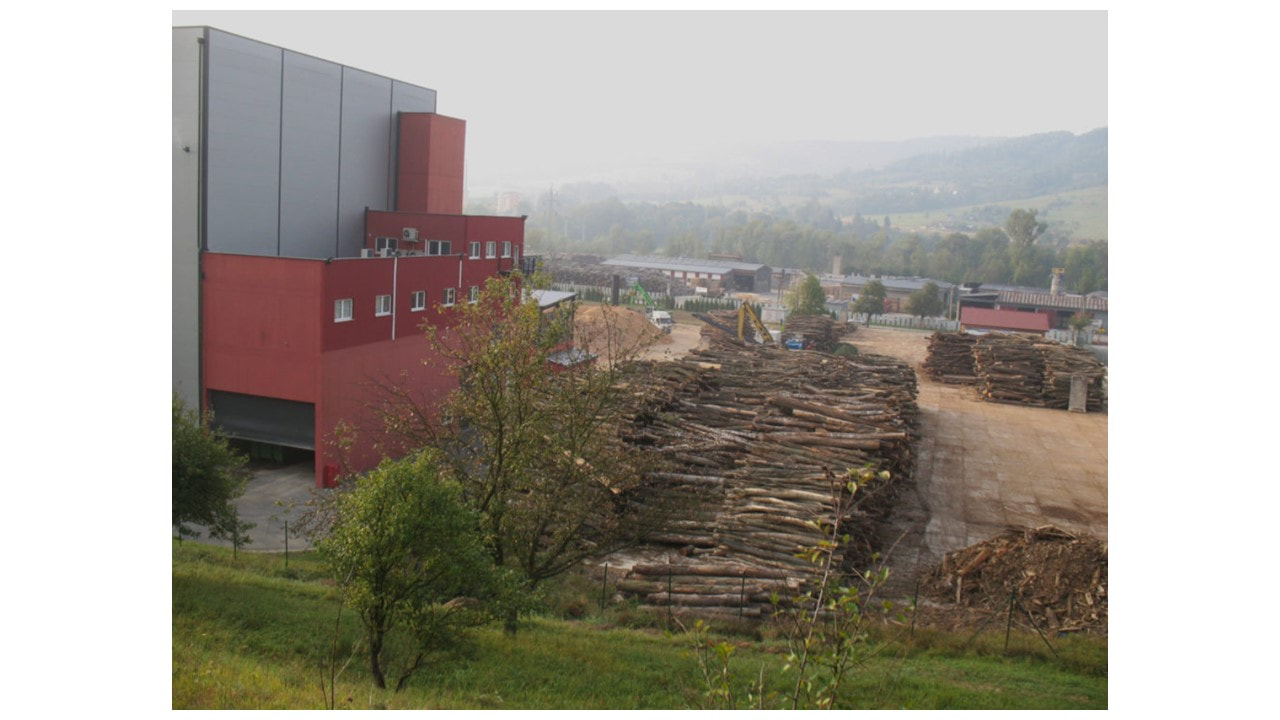 Logs await processing at a wood pellet plant in Bardejov, Slovakia.
​An estimated 10 million cubic meters of wood is logged each year from the country's forests.
​Europe’s forests have for centuries been cut for household fuel and, in the past century, for local heating plants. But what is happening now is on a very different scale. The change has been fueled by new technology that converts timber into wood pellets that have been heated to remove moisture and compressed, which makes long-distance transportation practical and economic. By some estimates, nearly half the cut wood in the EU is now being burned to generate electricity or for heating. And there is growing evidence that the logging is damaging forests and reducing their ability to store carbon.

One region at risk is the Carpathian Mountains, stretching from Austria to Romania. It contains the continent’s largest surviving old-growth forests outside Russia, which are home to up to half the continent’s brown bears, wolves, and lynx. In Romania, the Environmental Investigation Agency (EIA) has reported widespread illegal logging, with much of the timber exported for burning in power stations in Austria and Germany. The EIA has accused Schweighofer, a company owned by one of Austria’s richest families, of processing illegally-harvested wood from Romania. Its investigator Susanne Breitkopf told me there is “a clear link between illegal logging in Romania and the EU wood pellet market.” The company says it “makes all possible efforts” to keep illegal timber out of its supply chain. In Slovakia, Peter Sabo of Wolf, an NGO campaigning to protect the country’s forests, estimates from Slovakian government data that 10 million cubic meters of wood is logged in the country each year, against a sustainable yield of 6 million cubic meters. The difference is almost entirely accounted for by the 3.5 million cubic metres burned for Slovakia’s energy and heating. Yet nowhere do the carbon emissions from this burning turn up in the carbon accounts of Slovakia or the EU.

Forest cover in Europe is increasing, and the forests are acting as a growing carbon “sink.” But an EU report last year forecast that the growth of Europe’s forest sink will be reduced by more than 30 percent between 2005 and 2030 because of cutting for pellet burning and other changes in land use. It said that “biomass and land use change can be identified as key drivers” in the predicted decline, with pellet-burning plants clearly playing a large part. Yet so far, the resulting releases of carbon to the atmosphere are not included in EU carbon accounting.

Foreign forests have also been targeted to fuel European power stations. For several years, the Swedish state power company Vattenfall imported wood chips from old rubber trees on the giant Firestone rubber plantation in Liberia. The project, part-funded by the Overseas Private Investment Corporation, a U.S. federal agency, had originally promised to light homes in the West African nation. But that never happened, and after the project collapsed in 2012, the wood chips began being shipped to Sweden.

Drax buys on a small scale from Canada and has plans to buy Brazilian wood. But the U.S. has become Europe’s biggest foreign supplier, and Drax has become the test case for whether wood pellets can be a genuine low-carbon energy source. So how does the case stack up?
Widespread illegal logging has been reported in Romania,
​with the timber exported for burning in power stations in Austria and Germany.
​Following conversion of its boilers, two-thirds of the power from the 4,000-megawatt power giant on the east coast of England now comes from burning pellets. The pellets mostly come from three American mills run by the Drax Group — at Amite in Mississippi, and Morehouse and LaSalle in Louisiana — and purchases from other U.S. suppliers, notably Enviva, which has in the process become the world’s largest producer of wood pellets. Drax says the only carbon footprint from burning those pellets is from the harvesting, processing, and transporting of the wood. It reckons that, overall, converting its power plant from coal to wood saves 12 million tons of CO2 emissions a year, making Drax “the largest carbon-saving project in Europe,” according to its CEO Andy Koss.

The EU and the U.K. both accept that analysis. But critics say there are a series of problems with the claim. The first is that nobody can be certain the new trees necessary to absorb power-station emissions will ever be planted, especially since Drax does not own the forests harvested for its timber. A British government study in 2014 concluded that a worst-case scenario, in which the logged forest land is turned over to agriculture, could result in total CO2 emissions twice as great as from burning coal. Drax and its allies say this is most unlikely. Dale Greene, Dean of Forestry at the University of Georgia, contends that far from reducing forests, pellet purchases in the American South are encouraging landowners to maintain forests and plant more trees.
A second concern is the time lag. Even if new trees are planted promptly to replace old ones, they will take between 20 and 100 years to grow sufficiently to take up all the CO2 emitted by burning the old trees. Throughout that time, there will be more CO2 in the air. This is a clear threat to the world keeping warming below 1.5 degrees Celsius in the next few decades, argued Duncan Brack, of the London-based think tank Chatham House. Again, Drax contests this. It maintains that in the real “working” forests where it gets its timber, there is a constant cycle of cutting and planting trees. So, the company says, the forests contain a stable amount of carbon at all times. The argument is hard to resolve. But Brack insists that, even accepting Drax’s premise, wood cut for construction or making furniture will keep its carbon out of the atmosphere for much longer than wood cut to burn in a power station.

A third concern is exactly which bits of the trees are burned at the power station. Do their boilers run on specially cut timber or waste wood? Most operators of wood-burning power plants publicly insist that their main fuel is forest “thinnings,” such as twigs and branches. But in practice, the definition of “thinnings” often includes whole trees. In fact, it is often mostly whole trees. Drax, for instance, describes its fuel as “low-grade wood such as forest thinnings, tree tops and branches.” But when visiting its U.S. mills, the wood piled in timber yards ready for turning into pellets was mostly tree trunks six meters or more long. Drax is not unusual. A 2015 analysis prepared for the American Forest and Paper Association, a trade association, concluded that most wood pellets produced in the U.S., both for domestic burning and for export to the U.K., were prepared from whole trees.

The issue is critical because leftovers from harvested trees, such as twigs and branches, would typically be burned in wood mills as waste, or left to rot on the forest floor. They would quickly release their carbon. All agree that burning them for electricity generation would not add to atmospheric CO2, whereas whole trees left standing would continue to grow and absorb CO2 from the air.
Worldwide, pellet burning has risen strongly. According to UN data, pellet production reached 28 million tons in 2015, a rise of more than 40 percent in three years, with the U.S. the biggest source. Markets for pellets outside Europe and North America for the moment remain small. But industry analysts predict growth in Japan and South Korea, as those nations try to manage lower carbon emissions with reduced dependence on nuclear power, and in China. Each is likely to depend on imports,” says William Strauss of independent analysts FutureMetrics. With wood pellets, we may be seeing the birth of a new global business exploiting loopholes in current climate rules that could cause an unseen surge in carbon emissions and fatally undermine the Paris Climate Agreement.


Author Information: Fred Pearce is a freelance author and journalist based in the U.K. He is the author of numerous books, including The Land Grabbers, Earth Then and Now: Amazing Images of Our Changing World, and The Climate Files: The Battle for the Truth About Global Warming.