Climate Change or Just the Weather
by Scott Johnson
​Every once in a while, a day comes along to remind you that weather is more than a trusty source of social lubrication for awkward elevator encounters. Severe weather can threaten property, homes, and even lives. If a statistically rare weather event happens to you rather than someone else, abstract ideas about low probabilities can become concrete, like the way the phrase "broken bone" means so much more when you're wearing a cast. 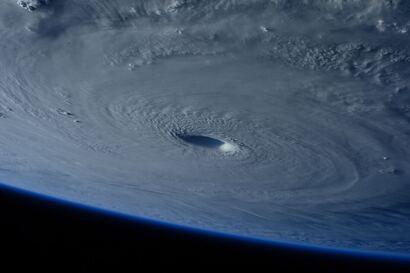 Climate is really just the probabilities of weather, so extreme weather is simply the most attention-grabbing aspect of a region's climate. Thus, climate change includes a change in the probabilities of many weather extremes. As a result, each individual disaster now triggers a natural question: did humanity's history of greenhouse gas emissions make that disaster more likely or worse? It's an inherently complex question for scientists to answer and gives people who reject climate science rhetorical room to loudly argue that you can't prove climate change was solely responsible for a storm. ​For any storm, that's both true and completely irrelevant. Climate change's culpability is not an all-or-nothing proposition. To make an analogy, the steroid molecule isn't the one hitting the home run; the baseball player is. A baseball player who starts using steroids almost certainly has hit plenty of "natural" home runs in his or her past. But as their home run tally starts to accelerate, it would be foolish to get caught up in pedantic arguments about whether any particular home run would have happened in a steroid-free parallel universe. If a mundane player begins smashing home-run records, you know your sport has a steroid problem.
​Probability

Extreme weather almost always requires that a number of moving parts line up—you may need an unusual amount of moisture in the air at the same time that an unusual pressure pattern guides it in just the right direction. For an event to be extreme, it has to be rare to start with (otherwise you'd call it "normal weather"). So, by definition, it involves some unlucky coincidence. Climate change alters the conditions in which all these parts are moving. The changes could give the moving parts more opportunities to line up in nasty configurations, or they could raise the upper limit on what's possible whenever they do. "I always frame it as a probabilistic statement," says Oxford University's Friederike Otto, who studies weather disasters. "Every extreme event has multiple causes, and it will never be the case that climate change is the only reason why an extreme event happened. You can't say that you developed cancer because you smoked, [but] you can say that smoking increased the likelihood of developing cancer."

While extreme weather has always existed, some of the extremities will change as Earth's climate warms. The task in front of climate scientists like Otto is to figure out which weather types have shown measurable shifts in patterns over the last century or so and to tease out the contribution of human-caused warming to those shifts. Indeed, all extremes are affected by natural weather variability—noisy wiggles in the data that make spotting a trend harder. Some wiggles are short, meaning they don't take long to average out. But other natural wiggles tied to ocean circulation are longer—multiple decades, even. This means you need a longer period of data gathering before a trend can become clear.
​
​Some certainty

Here's what scientists are the most certain about: heatwaves and heavy precipitation are on the rise. Obviously, warmer temperatures mean more hot days and an uptick in record hot days (while cold records become less common). You would also expect to see more intense precipitation from basic physics. Warmer air has a greater capacity for water vapor—6 percent to 7 percent more for every 1°C warming—and evaporation also gets a boost from warmth. That allows storms to wring out a bigger, wetter sponge. Beyond that, the condensation of water vapor into rain droplets releases heat that helps rising air keep on rising, wringing the sponge even harder to get all the rainwater out. We also know that many storm tracks—the common paths that stormy weather patterns inhabit—are crawling toward the poles. That can make for local changes in extremes if a storm track is moving into or out of your neighborhood. Although you might expect more intense rainstorms to cause an increase in flooding, scientists can't say much about this, globally. Long-term flood records are spotty and inconsistent, and any potential trends can be masked by both flood-control measures and development that paves land, funneling more rainwater into drainages. We just don't have clear data to check for a climate-caused trend. (Coastal tidal flooding, on the other hand, is clearly increasing as sea level rises.)
​Credit where credit is due

The science of extreme-weather attribution has matured a great deal over the last decade. Where once scientists simply demurred that a single heat wave or rainstorm could not be connected to climate change, there are now established methods of analysis and reporting. In fact, some researchers in this field are now helping national weather agencies get set up to run these analyses on their own as standard practice. In addition to answering the immediate climate change question, studies of individual weather events have helped shine spotlights on historical trends—including some that hadn't been quantified yet. The approach can also disentangle apparent trends that are not due to climate change. If weather observations show something different than the models predict, you can tell there is another factor in play. "For example," Friederike Otto told Ars, "in large parts of India, we don't see an increasing trend in heat waves, which is probably not because there is no trend, but because it's masked by [sunlight-reflecting aerosol pollution] or changes in irrigation."
First off, members of the team have to define what "the weather event" was. Was it a three-day rainfall total for a city? A month-long drought in a specific country? Once they have it defined, they look to the historical data to see how common an event like that has been in the past. They can also see whether there is a trend that is already apparent. Next, they search long-term climate model simulations for similar rainstorms or droughts. One set of simulations represents the world as it is today, with humanity's greenhouse gas emissions. If the simulated behavior and frequency of the event matches recent weather data pretty well, the models can serve as a reliable indicator of what's going on.

A second set of simulations represents the world without all the human-caused changes — as it was in the mid-1800s, for example. The difference between this and the first simulation set shows how much of an effect we expect climate change to have. If the rainstorm in question changes from a once-in-a-century event without humans to a twice-per-century event in a modern climate, the models are predicting that humans should already have caused a trend. Between the historical data and the model analysis, the team can then conclude whether or not we have good evidence that climate change increased the likelihood of the disaster in question. In 2016, for example, southern Louisiana received up to 65 centimeters (about 25 inches) of rain in just three days.
​The weather@home model, which has been installed by some 30,000 volunteers (but could definitely use some more), is constantly simulating one month ahead based on forecasts of the slow-changing ocean-surface temperature pattern. That can help separate out the influence of naturally variable patterns like El Niño and La Niña. As with all research in this field, the rapid-response analysis can't be done if any of the required components are missing—if the historical data isn't good enough in that area, or if climate models can't simulate that type of weather event well enough.
​Size matters

Geert Jan van Oldenborgh of the Royal Netherlands Meteorological Institute, who is part of this rapid attribution project, has said that small-scale events like tornadoes or hail are beyond their capabilities. He adds that attempts to look at wind storms and droughts have been challenging. "We just did our first windstorm analysis, but that did not turn out well, with big discrepancies between observed and modeled trends," van Oldenborgh said. "We concluded that non-climate factors, probably increases in [surface] roughness, were more important than climate change effects. These are currently not included properly in the models."  "Meteorological drought (absence of precipitation) also is amenable to analysis," he said, "although it is usually hard to detect trends, as drought is usually only a problem when the variability is large relative to the mean, which usually implies it is large relative to the trend." Still, the team's analysis of the recent drought in Cape Town, South Africa, found that climate change made the drought about three times more likely.

And which events are easiest to evaluate? Temperature extremes and large rainstorms—the weather patterns with the clearest human-caused trends and the most abundant historical data. After all, this isn't about cooking up some hypothetical simulations based on hunches and then treating their output as fact. Trends with multiple lines of supporting evidence—including the principles of physics—are the ones that climate scientists are confident in. If laboratory experiments tell you rainfall should become more intense with warming, solving the theoretical equations gives you the same answer, and rain gauges out in the world record it happening, you probably understand what's going on.


​Knowing is half the battle

All this tells you how to think about extreme weather. You shouldn't assume that a day of unusual weather is "proof" of climate change, but a deeper analysis could show that climate change is partly responsible. It's impossible to rewind the tape and find out whether today's storm would have happened in a world without greenhouse gas emissions and climate change. On the flip side, every day's weather is now occurring in a world where the climate has, in fact, changed. We know that has a significant impact on certain types of weather.

The end goal is more practical than just retroactively assigning blame to inform casual conversation. We want to know what kind of future weather we should prepare to survive. "When an event happens, people are realizing their vulnerabilities," Friederike Otto pointed out, "and also in the months after an event, there is often a political opportunity to build resilience [and] to do adaptation measures. And if the event that happened is actually an event that is less likely with climate change, or it is a very, very rare event that also stays a very rare event under climate change, then that is as important to know as [when] climate change really is a game changer, and that's the kind of event you need to adapt to."

It's hard enough to ascertain the past range of, say, flash flooding so you know what your new bridge should be built to withstand. Unfortunately, the past is not a sufficient indicator of the future we've created. It's not enough to know that the baseball player is taking steroids; instead, we need researchers to figure out exactly how that player's hits are changing so we can protect the cars in the parking lot from an increasingly dangerous barrage of home-run balls.
This article is republished, with permission from Ars Technica.
​Author Information: Scott has a master's in hydrogeology from the University of Wisconsin-Madison, and has worked as a hydrogeologist for the Wisconsin Department of Natural Resources and the Wisconsin Geological and Natural History Survey.