Climate Risk and Response: Physical Hazards and Socioeconomic Impact
by McKinsey Global Institute
After more than 10,000 years of relative stability—the full span of human civilization—the Earth’s climate is changing. As average temperatures rise, climate science finds that acute hazards such as heat waves and floods grow in frequency and severity, and chronic hazards, such as drought and rising sea levels, intensify. In this report, we focus on understanding the nature and extent of physical risk from a changing climate over the next one to three decades, exploring physical risk as it is the basis of both transition and liability risks.
Spatial: Climate hazards manifest locally. The direct impacts of physical climate risk thus need to be understood in the context of a geographically defined area. There are variations between countries and within countries. Warming is “locked in” for the next decade because of physical inertia in the geophysical system.

Non-stationary: As the Earth continues to warm, physical climate risk is ever-changing or non-stationary. Further warming is “locked in” for the next decade because of physical inertia in the geophysical system. Climate science tells us that further warming and risk increase can only be stopped by achieving zero net greenhouse gas emissions. Furthermore, given the thermal inertia of the earth system, some amount of warming will also likely occur after net-zero emissions are reached.
Nonlinear: Socioeconomic impacts are likely to propagate in a nonlinear way as hazards reach thresholds beyond which the affected physiological, human-made, or ecological systems work less well or break down and stop working altogether. This is because such systems have evolved or been optimized over time for historical climates.

Systemic: While the direct impact from climate change is local, it can have knock-on effects across regions and sectors, through interconnected socioeconomic and financial systems.

Regressive: The poorest communities and populations within each of our cases typically are the most vulnerable. Climate risk creates spatial inequality, as it may simultaneously benefit some regions while hurting others.
Under-prepared: While companies and communities have been adapting to reduce climate risk, the pace and scale of adaptation are likely to need to significantly increase to manage rising levels of physical climate risk. Adaptation is likely to entail rising costs and tough choices that may include whether to invest in hardening or relocate people and assets.
Part 2: Climate Change is Already Having Substantial Physical Impacts in Regions Across the World

The planet’s temperature has risen by about 1.1 degrees Celsius on average since the 1880s. This has been confirmed by both satellite measurements and by the analysis of hundreds of thousands of independent weather station observations from across the globe. Scientists find that the rapid decline in the planet’s surface ice cover provides further evidence. This rate of warming is at least an order of magnitude faster than any found in the past 65 million years of paleoclimate records.
Looking forward, climate science tells us that further warming is unavoidable over the next decade at least, and in all likelihood beyond. With increases in global average temperatures, climate models indicate a rise in climate hazards globally. These models find that further warming will continue to increase the frequency and/or severity of acute climate hazards and further intensify chronic hazards. 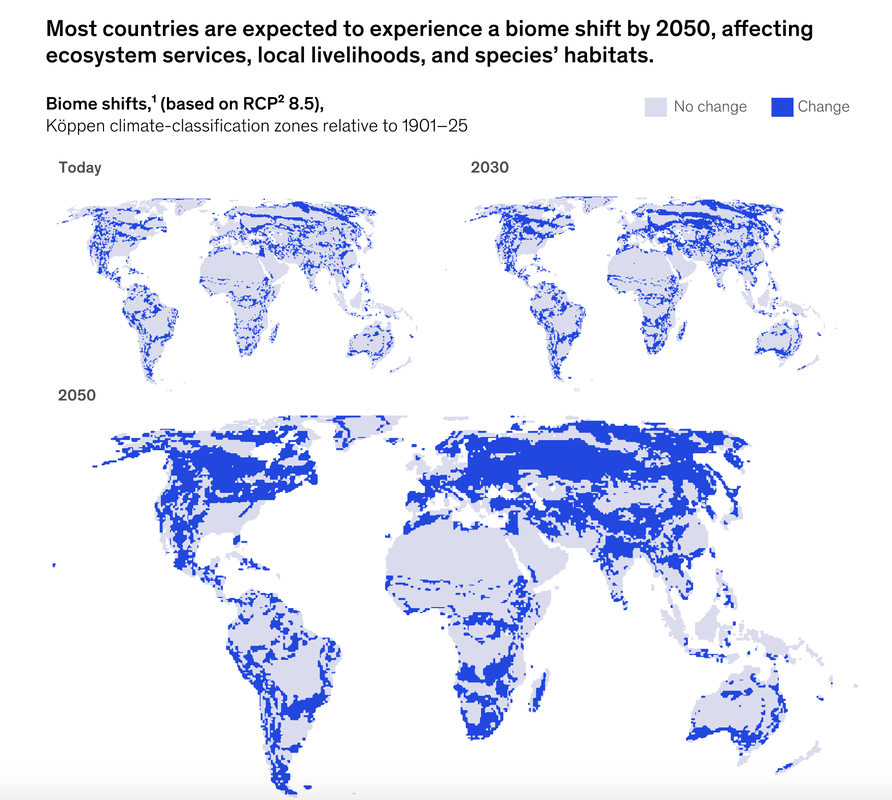 ​Part 3: Socioeconomic Impacts Will Likely Be Nonlinear and Have Knock-on Effects

​Climate change affects human life as well as the factors of production on which our economic activity is based. We measure the impact of climate change by the extent to which it could disrupt or destroy human life, as well as physical and natural capital. Climate change is already having a measurable socioeconomic impact and we group these impacts in a five-systems framework. This impact framework is our best effort to capture the range of socioeconomic impacts from physical climate hazards and includes:

Livability and Workability: Hazards like heat stress could affect the ability of human beings to work outdoors or, in extreme cases, could put human lives at risk. Increased temperatures could also shift disease vectors and thus affect human health.

Food systems: Food production could be disrupted as drought conditions, extreme temperatures, or floods affect land and crops, though a changing climate could improve food system performance in some regions.

Physical Assets: Physical assets like buildings could be damaged or destroyed by extreme precipitation, tidal flooding, forest fires, and other hazards.

Infrastructure services: Infrastructure assets are a particular type of physical asset that could be destroyed or disrupted in their functioning, leading to a decline in the services they provide or a rise in the cost of these services. This in turn can have knock-on effects on other sectors that rely on these infrastructure assets.

Natural Capital: Climate change is shifting ecosystems and destroying forms of natural capital such as glaciers, forests, and ocean ecosystems, which provide important services to human communities. This in turn imperils the human habitat and economic activity.
The nine distinct cases of physical climate risk in various geographies and sectors that we examine, including direct impact and knock-on effects, as well as adaptation costs and strategies, help illustrate the specific socioeconomic impact of the different physical climate hazards on the examined human, physical, or natural system. Our cases cover each of the five systems across geographies and include multiple climate hazards, sometimes occurring at the same location. Overall, our cases highlight a wide range of vulnerabilities to the changing climate.

Specifically, we looked at the impact of climate change on livability and workability in India and the Mediterranean; disruption of food systems through looking at global breadbaskets and African agriculture; physical asset destruction in residential real estate in Florida and in supply chains for semiconductors and heavy rare earth metals; disruption of five types of infrastructure services and, in particular, the threat of flooding to urban areas; and destruction of natural capital through impacts on glaciers, oceans, and forests.

Our case studies indicate that physical climate risk is growing, often in nonlinear ways. Physical climate impacts are spreading across regions, even as the hazards and their impacts grow more intense within regions. Most of the increase in direct impact from climate hazards to date has come from greater exposure to hazards rather than from increases in the mean and tail intensity of hazards. In the future, hazard intensification will likely assume a greater role. Key findings from our cases include:

While our case studies illustrate the localized impacts of a changing climate, rising temperatures are a global trend and we assess how physical climate hazards could evolve in 105 countries.

In our assessment of inherent risk, we find that all 105 countries are expected to experience an increase in at least one major type of impact on their stock of human, physical, and natural capital by 2030. Intensifying climate hazards could put millions of lives at risk, as well as trillions of dollars of economic activity and physical capital, and the world’s stock of natural capital. The intensification of climate hazards across regions will bring areas hitherto unexposed to impacts into new risk territory. In particular:
Part 5: Countries with Lower GDP Per Capita Levels Are Generally More Exposed

While all countries are affected by climate change, we find that the poorest countries could be more exposed, as they often have climates closer to dangerous physical thresholds. They also rely more on outdoor work and natural capital and have less financial means to adapt quickly. The risk associated with the impact on workability from rising heat and humidity is one example of how poorer countries could be more vulnerable to climate hazards. When looking at the workability indicator (that is, the share of effective annual outdoor working hours lost to extreme heat and humidity), the top quartile of countries (based on GDP per capita) have an average increase in risk by 2050 of approximately 1 to 3 percentage points, whereas the bottom quartile faces an average increase in risk of about 5 to 10 percentage points. Lethal heat waves show less of a correlation with per capita GDP, but it is important to note that several of the most affected countries—Bangladesh, India, and Pakistan, to name a few—have relatively low per capita GDP levels.

Part 6: What Can Decision Makers Do?

In the face of these challenges, policy makers and business leaders will need to put in place the right tools, analytics, processes, and governance to properly assess climate risk, adapt to risk that is locked in, and decarbonize to reduce the further buildup of risk.
Societies have been adapting to the changing climate, but the pace and scale of adaptation will likely need to increase significantly. Key adaptation measures include protecting people and assets, building resilience, reducing exposure, and ensuring that appropriate financing and insurance are in place. Implementing adaptation measures could be challenging for many reasons. The economics of adaptation could worsen in some geographies over time, for example, those exposed to rising sea levels. Adaptation may face technical or other limits. In other instances, there could be hard trade-offs that need to be assessed, including who and what to protect and who and what to relocate.