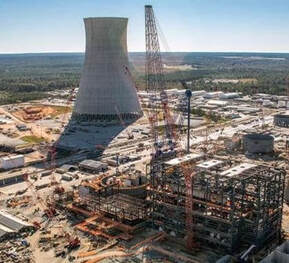 ​Climate change is “the slow-motion equivalent of a large asteroid heading to earth,” writes Joshua S. Goldstein and Staffan A. Qvist in A Bright Future: How Some Countries Have Solved Climate Change and the Rest Can Follow, a new book about climate solutions. It’s potentially catastrophic, and requires a political solution, he argues.  But Goldstein says that if he were put in charge of environmental grant-making at a big US foundation, he would not fund the grassroots groups that have done more than any other to build a climate movement — not the Sierra Club, not Greenpeace, not 350.org.

Why not? Because these green groups call for an energy sector powered entirely by renewable energy, predominantly wind and solar. (See the Sierra Club’s Ready for 100, Greenpeace’s 100% renewable energy for all and 350.org’s Build 100% Renewables.) This is misguided. Someday, perhaps, an entire nation could be powered by renewable energy, but that day is too far off to deal with the climate threat, say Goldstein and Qvist: “There’s a lot of magical thinking going on. Everybody loves renewables.”

Conversely, very few people love nuclear power. But Goldstein, a political scientist, and Qvist, an engineer, argue that the only way to rapidly decarbonize the world’s energy systems is with a rapid rollout of nuclear power and renewable energy: “Up until now, only one carbon-free energy source has proven able to scale up very quickly and — in the right conditions — affordably. That source is nuclear power." Meantime, they say, “100% renewables is a slogan that distracts us from the work at hand, which is the decarbonization of the world.” Their arguments have big implications for foundations and nonprofits that are striving to curb climate change. If these NGOS are serious about reducing carbon emissions, they need, at the very least, to support existing low-carbon nuclear power. Ideally, they should push for many more.
A Bright Future begins by comparing a number of countries in Europe, with special emphasis on Sweden, which embraced nuclear power and renewables, and Germany, which focused on renewables and is now phasing out its nuclear plants:
That said, nuclear power has issues. The anti-nuclear arguments are by now familiar — that nuclear power is dangerous, that there’s no place to safely store waste, that the spread of nuclear plants could lead to the proliferation of weapons of mass destruction. These arguments are rebutted, persuasively, by A Bright Future.  Which highlights the biggest obstacle to attempts to build new nuclear plants: They are ruinously expensive. For years, the nuclear industry has had an awful time building plants in the US and in Europe; they take forever and run billions of dollars over budget. South Korea has built nuclear power plants at a lower cost, but its buildout has run into political opposition. In France and Sweden, too, surprisingly, green groups are arguing against nuclear.

The essential question is, can changes in the political and regulatory climate — along with research into next-generation nuclear power plants — bring down costs and lead to a resurgence of nuclear energy? Goldstein is hopeful. Government support for nuclear research would help. So, of course, would a price on carbon. States that have passed renewable portfolio standards to require that solar and wind be a bigger part of their electricity mix could expand those to become low-carbon energy standards, which would include support for nuclear as well. And, if the world ever gets to the point where it is building lots of nuclear plants, economies of scale will surely reduce costs. “Somebody’s got to innovate,” Goldstein says. “The goal is to make these less like building a complicated bridge and more like stamping Boeing jetliners as they come off an assembly line.”
​Climate funders face a dilemma. The Sierra Club, Greenpeace and 350.org built today’s climate movement, such as it is, and for that they deserve great credit. Yet they stand in the way of the only proven climate solution. “In a supreme irony,” Goldstein and Qvist write, “the very groups most actively opposing nuclear power are those most vocal about climate change.”

​​Happily, there’s a small but growing group of pro-nuclear environmentalists. Stewart Brand’s brilliant book, Whole Earth Discipline, is now nearly a decade old. Climate scientists James Hansen, Ken Caldeira and Kerry Emanuel have all called for a nuclear power comeback. Bill Gates has invested in next-gen nuclear. NGOs including the Clean Air Task Force and the Breakthrough Institute say nuclear energy will be needed to decarbonize the global economy, and the Union of Concerned Scientists recently argued for policies to prevent the shutdown of nuclear plants that would lead to more burning of natural gas.

At the very least, philanthropists should provide more funding to the pro-nuclear green groups. The US badly needs a robust debate about nuclear energy and climate change.


This article from Medium is reprinted with permission.