A Permitting Framework for Geologic Sequestration Wells
by Shari Ring 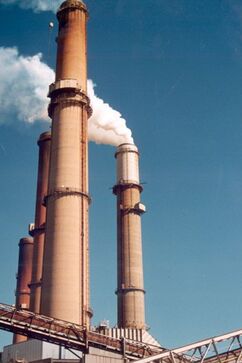 ​Because injection of any fluid has the potential to endanger underground sources of drinking water (USDWs), injection activities are regulated under Safe Drinking Water Act (SDWA) authority. Injection well operators have decades of experience injecting carbon dioxide for enhanced oil recovery and other fluids for industrial waste disposal purposes; this provides a strong technical basis for injecting carbon dioxide for GS. However, carbon dioxide injection for GS brings about unique challenges relative to other injection activities.
To address these issues and ensure the protection of USDWs, the U.S. Environmental Protection Agency (EPA) finalized technical requirements for carbon dioxide GS wells, known as Class VI wells, in 2010. On April 7, 2017, Archer Daniels Midland (ADM) began injecting carbon dioxide at the nation’s first operating Class VI project, in Decatur, IL. ADM will permanently store up to 5.5 million tons of carbon dioxide in the Mt. Simon Formation, demonstrating the commercial-scale applicability of GS technology.

Permitting of carbon dioxide GS wells involves a rigorous evaluation of the site geology, the predicted behavior of the carbon dioxide plume and associated pressure front, and the well to ensure that a proposed site can receive and confine the carbon dioxide. A holistic permit application review process—implemented by a team of geologists, hydrogeologists, modelers, engineers, risk analysts, and finance experts—considers these elements and supports the development of protective Class VI permits that govern all aspects of carbon dioxide injection. What follows is an overview of the highlights of a permit application review. 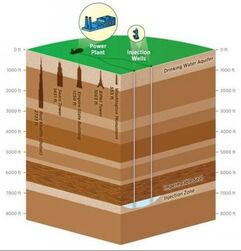 ​Operators seeking to inject carbon dioxide for GS must obtain a permit before they may drill a Class VI well. A GS project is defined by the extent of the area of review (AoR), which is the region surrounding the well where USDWs may be endangered by the injection activity. A permit applicant must delineate the AoR to predict the movement of the injected carbon dioxide 2 and displaced fluids using a computational model that considers the geologic conditions and proposed operations.

​The permit application presents a detailed evaluation of site geology, the AoR and how the modeling inputs reflect site-specific geologic and operational conditions, well construction design, plans to monitor the site, and other required activities. Permit applications are multi-faceted and address all aspects of the GS project to ensure that USDWs are protected. They are comprehensive, and contain maps and cross sections, modeling results, water quality data, analyses of core samples and well logs, engineering schematics, and financial information.
Permit Application Reviews

The core of the permit application review is an in-depth evaluation of the geologic setting and the AoR modeling. This serves a two-fold purpose: (1) it confirms that the site can receive and store the carbon dioxide and (2) it establishes the foundation for protective permit conditions.

The review is an iterative process, which requires frequent communication between the applicant and the reviewer (see Figure 2). Because some information is collected during drilling of the well and may not be available at the time the permit application is prepared; these data gaps would be filled via additional testing to be performed before injection commences.

The review team evaluates extensive information about the geology and hydrogeology of the proposed site. The purpose of this review is to ensure that the well will be sited in an area with a suitable geologic system, including: (1) an injection zone with sufficient capacity to receive the total volume of carbon dioxide to be injected and (2) a confining zone that is free of transmissive faults or fractures that could allow carbon dioxide movement that endangers USDWs. The team reviews information on: the depth and thickness of the injection and confining zones; porosity, permeability, and rock strength; hydrogeology; subsurface geochemistry and mineralogy; faults and fractures; and seismic history.

The geologic review is conducted in parallel with the review of the AoR delineation modeling—the geologic information serves as inputs for the AoR model and the modeling results help support a determination that the geologic formations are suitable to receive and contain the carbon dioxide.

The review team performs independent computational modeling to confirm that the applicant’s AoR modeling approach is sufficiently rigorous and accurately predicts plume and pressure front behavior. In a process that is similar to the delineation modeling performed by the applicant, the review team develops a model that incorporates the geologic and operational information described in the permit application. Inputs may include: rock properties such as porosity and permeability; and baseline pressure, temperature, and salinity conditions. The model also considers information about planned injection operations (e.g., injection volume, rate, and duration) and injection depth.

The model generates outputs that can be used to depict the three-dimensional evolution of the carbon dioxide plume and pressure front during and after injection operations (up to 100 years or more after the start of injection). See Figure 3. The model outputs support the evaluation of the applicant’s modeling approach, inform the evaluation of other components of the permit application, and support the development of permit conditions.

The geologic information and modeling support a comprehensive evaluation of site-suitability. Local and regional geologic structures are examined to confirm that they are conducive to receiving and confining the carbon dioxide. The injection zone is evaluated to verify that it has sufficient capacity to contain the volume of carbon dioxide to be injected without pressure increases that could fracture the confining zone. The integrity of the confining zone is reviewed to ensure that it will provide a barrier to movement of carbon dioxide or other fluids out of the injection zone. These evaluations are informed by geologic information (e.g., rock properties) and the presence of features that trap carbon dioxide; proposed operating conditions; and the AoR modeling.

The compatibility of the carbon dioxide with subsurface fluids and minerals is also evaluated. This assessment reflects geochemical and mineralogical data and the composition of the carbon dioxide. Anticipated changes in rock porosity or permeability that could affect the movement of carbon dioxide in the subsurface are incorporated into the AoR modeling. The potential for mineral precipitation or dissolution that could liberate trace elements can be addressed via tailored groundwater monitoring during project operations.

Class VI permits govern the GS project—from well construction through injection operations and until it can be demonstrated that movement of the carbon dioxide plume and pressure front do not endanger USDWs. All UIC permits address the construction, operation, monitoring, and plugging of injection wells to prevent the movement of fluids into USDWs or unauthorized zones. Class VI permits tailor these conditions to the unique aspects of carbon dioxide injection for GS. These permit conditions are developed based on the understanding of the site geology as informed by the site characterization process and the modeled predictions of plume and pressure front behavior.

Class VI permits include an AoR and Corrective Action Plan, which operators must follow when they periodically reevaluate the AoR throughout the project’s duration. The initial AoR modeling serves as a benchmark for the process and for the inputs to be used in future AoR reevaluations. The plan also describes procedures for performing any needed corrective action on deficient wells that penetrate the confining zone within the AoR and could allow fluid movement into USDWs.

Well construction conditions ensure that the injection well will be designed and constructed with materials (i.e., multiple layers of casing and tubing and cement) that are compatible with the carbon dioxide and subsurface chemistry, appropriate to planned operations, and of adequate strength. Engineers evaluate well construction information and consider: the source and composition of the carbon dioxide, subsurface geology (particularly the location of permeable and water-bearing formations) and geochemistry, injection pressures, and the forces and stresses the well will encounter. Figure 4 is a schematic of a typical Class VI well.

The permit’s operating conditions include a maximum injection pressure that is no more than 90 percent of the fracture pressure of the injection zone (as informed by the geologic review and AoR modeling). The permit also includes limits on the carbon dioxide volume to be injected that reflect the storage capacity of the injection zone, provisions for the composition of the carbon dioxide, and well shutdown procedures.

A multi-faceted Testing and Monitoring Plan ensures that the project is proceeding as designed. Activities include: carbon dioxide analysis; monitoring of injection pressure, rate, and volume; testing the well to demonstrate integrity; corrosion monitoring; monitoring ground water quality; tracking the carbon dioxide plume and pressure front; and other monitoring as appropriate. The permit also includes provisions for pre-operational testing to verify well integrity and confirm site geology. The testing is designed to be appropriate to the planned operations, the well’s construction, and the geologic environment throughout the AoR (including addressing any potential for endangerment based on the application review); it also supports validation of modeled predictions.

An Emergency and Remedial Response Plan describes actions to be taken to address events that could potentially endanger USDWs during all phases of the project. The plan is based on site geology, the extent of the AoR, and operating conditions.

Well plugging conditions ensure that the materials and procedures for plugging the injection well are appropriate to the well’s construction and site geology and geochemistry. The permit also includes a Post-Injection Site Care (PISC) and Site Closure Plan that outlines the post-injection monitoring strategy, which is an extension of injection-phase ground water monitoring and plume and pressure front tracking. This monitoring must continue until it can be demonstrated that subsurface pressures have declined such that there is no endangerment to USDWs. The plan also describes how the site will be closed.

Financial responsibility for corrective action, well plugging, PISC and site closure, and emergency and remedial response ensures that these protective activities will be carried out without use of taxpayer money if the applicant becomes financially insolvent. Cost estimates for these activities are based on the permit conditions, as informed by the geologic and modeling reviews; the adequacy of the financial instruments is evaluated by finance experts.

Following approval of the well’s construction, review of information collected during drilling and testing of the well, and authorization to inject, the well operator must follow the conditions of the permit. The operator will perform testing and monitoring, report on the results, and periodically reevaluate the AoR to verify that the carbon dioxide plume and pressure front are moving as predicted. The permit is updated to ensure continued protection of USDWs based on the results of this reevaluation.

The permit application review is documented in a comprehensive administrative record, which informs the development of a robust, defensible, and science-based permit. Documenting the rigorous permit application review supports the goals of national consistency in Class VI permitting, while accounting for the unique conditions of each project. It also promotes confidence in the decision-making process to afford the policy certainty that operators will need to invest in GS technology. This is particularly important in early Class VI permitting, as permitting authorities collaborate to share information and lessons learned to improve the permitting process. Additionally, documenting and communicating the results will increase the public’s understanding and acceptance of GS.


AES Members have access to detailed information on all of the Class VI requirements and USEPA guidances to support GS permitting.
The original article was published by Cadmus.

About the author: Shari Ring leads the GS team at Cadmus, which supports all aspects of the development and implementation of the Class VI GS Rule. She has more than 25 years of experience supporting every regulatory initiative of EPA’s Underground Injection Control Program over that time.