How Renewable Energy Will Change Geopolitics
​An assessment by Stratfor Worldview
The 21st century promises to usher in the age of renewable energy. The world today is drawing more and more of its power from the sun, wind, water and biomass fuel, as the cost of these sources — down considerably from seven years ago — continues to drop. In electricity generation, companies are vying to build solar and wind generation facilities at auctions where bid prices are now comparable with those for new coal or natural gas buildups. (The progressive removal of subsidies has enabled market forces to work their magic on prices for solar and wind power.) The latest Bloomberg New Energy Finance analysis, in fact, projects that renewables will account for 64 percent of electricity generation worldwide by 2050. Electricity storage, too, is steadily becoming more affordable, to the extent that electric vehicles are expected to achieve price parity with conventional automobiles by the end of the next decade. Meanwhile, regulatory developments, such as bans in the United Kingdom and in France on the sale of gasoline- and diesel-powered cars after 2040, will help ensure that electric cars keep scaling up in key markets.

It will, of course, take decades for the transition to renewable energy to play out, and it may never phase out fossil fuels completely. Natural gas, for instance, will be important even late in the century. But with each passing prediction cycle, forecasters are more optimistic about how much global energy will come from renewable sources and how quickly. The rate of consumption for renewable energy is currently growing three times faster than the overall demand for energy. A world in which renewable sources account for, say, one-third of the total energy consumed is now entirely plausible, even likely, within the next two or three decades. The shift is already underway, and it will be no less transformative than the transitions from wood to coal and from coal to oil.

Changing Geopolitics as We Know It

Much has been written about the effect of fossil fuels on geopolitics. The world's highly concentrated deposits of oil, natural gas and coal have helped determine the global balance of power over the past century, giving a small number of energy-rich states, many of them in the Middle East, tremendous influence. Since World War II, the United States has acted as guarantor of global energy security, protecting its own national interests in the process. Washington formed alliances — most significantly with the Gulf Arab states — to stabilize global energy flows and has been the leader in safeguarding maritime choke points in the Middle East and Asia. The result is a globalized oil, coal and natural gas market and an international oil trade conducted in U.S. dollars — a major boon for the United States. 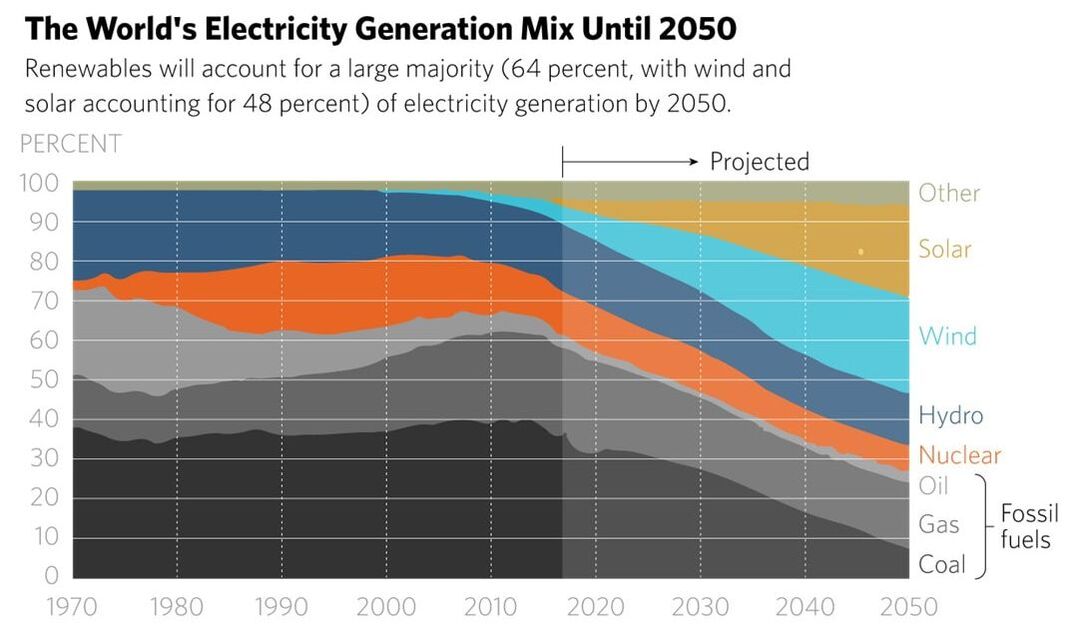 ​However, as Daniel Scholten, a leading researcher at the Delft University of Technology in the Netherlands, argues persuasively, renewable energy doesn't lend itself to the same kinds of international oligopolies. For one thing, renewable energy sources are practically universal: Few places in the world lack wind, sunlight, water and bioenergy of any kind. (That said, however, the renewables industry currently depends on a few critical materials, such as lithium, available and accessible in only a handful of countries worldwide.) Plants for generating wind, solar and hydropower, the predominant renewable energy sources, moreover, require no fuel — and, by extension, no fuel shipments — to operate once commissioned. In addition, renewable energy generation is by its very nature intermittent. The sun shines, the wind blows and rivers flow fully only some of the time, regardless of geography, further evening the geopolitical playing field. And compared with more traditional fuels such as natural gas and coal, renewable energies have a much higher potential for decentralized generation.
​Some countries will fare better than others in the course of the transition. Germany and the United States, for instance, are well-positioned to take advantage of the rise of renewables, thanks to their leadership in the field — and the sheer size of the U.S. market. But China is better off.
​In the past decade, China has raced ahead to become the world's unrivaled leader in the manufacture of clean energy products, including solar cells and batteries — of which it makes more than half of the global supply. It is also the world's biggest miner and supplier of rare earth materials, biggest deployer of renewable energy capacity and biggest market for electric vehicles. The country has acquired substantial lithium and cobalt mines abroad to power its push toward renewable energy, while also investing in electric utilities around the world, including in Europe, Africa and South America. More recently, it has proposed an ambitious initiative to integrate electricity markets throughout Asia with up to 3,000 kilometers (1,864 miles) of long-distance, high-voltage transmission lines.

These projects combined could make China the main provider of energy products, services and technology to much of the world. Even so, the United States can preserve its traditional importance in the energy sphere with innovation, as Varun Sivaram of the Council on Foreign Relations explains in his book Taming the Sun. The growth of renewable energy will demand new solutions in finance, technology and systems to fund clean energy products, reduce costs and boost efficiency, and improve grid integration.

Though they stand to benefit the most from the global shift toward renewable energy, China, Germany and the United States will not be the only winners. India, for example, may be able to stake its claim to the renewable energy market. The country doesn't have much of a domestic renewables industry, compared with China, the United States or Germany, though it is home to Suzlon Energy Ltd., a prominent wind-turbine manufacturer. On the other hand, it boasts one of the world's largest markets for renewable energy. Hoping to carve out a global role for itself in the renewables realm, India has launched a joint initiative with France for the International Solar Alliance, aimed at building and financing affordable solar power infrastructure in developing countries, including states in sub-Saharan Africa. The project, if successful, will enable India to increase its sway among the world's poorer countries. Smaller countries such as Sweden, Denmark, Uruguay, Nicaragua, Morocco and Kenya, meanwhile, could gain outsize regional influence as a result of the transition, thanks to their potential for exporting renewable energy and technology.

For other states, however, the rise of renewables will be a loss. Traditional oil exporters such as Venezuela, Kazakhstan and the Gulf Cooperation Council states will be among the countries hardest hit by the gradual transition away from fossil fuels. While states like Saudi Arabia will harness their abundant sunshine to become major solar power producers, this status won't confer the same geopolitical prominence that they enjoyed in the oil-dominated world of the past century. Russia, likewise, will lose some of its clout in the renewables-rich world of the future — though not all of it if enough states turn to nuclear energy to combat climate change. (Furthermore, the country will remain a significant exporter of natural gas to markets in Europe and Asia for decades to come.)

The End of the Energy Wars?

Along with the changes it will cause to the geopolitical order, the rise of renewable energy may well change the face of war. Fossil fuels, particularly oil, have set off several conflicts since World War II, including coups, civil wars and military interventions. Renewable energy — because of its comparative abundance and potential for decentralization — probably won't have the same power to spark large-scale military confrontations, especially in the Middle East. In fact, renewable energies may even inspire increased cooperation among states by encouraging regional grid integration. Electric grids, after all, are harder to use as a political weapon than are natural gas pipelines, for example.

Still, that doesn't mean renewables won't cause their share of international strife. As electric grids become smarter and more interconnected, they will make prime targets for cyberattacks by hostile states and terrorist organizations alike. (Decentralizing electricity grids will mitigate this risk.) The supply security of clean tech minerals also will be an area of contention, though interruptions in shipments of materials for new wind turbines, for instance, won't carry the same immediate consequences as disruptions in fuel supplies needed for daily power generation. And unlike oil, renewable energy technologies are rife with opportunities for innovation to use more commonplace materials in power generation. That means that in time, the commodities that clean tech currently depends on — namely rare earth metals, cobalt and lithium — will become less relevant.
The slow but accelerating drift from fossil fuels toward renewable energy sources will change life on Earth within the next few decades, redefining how countries interact with one another. Today it is increasingly difficult to argue, as skeptics have until recently, that renewable energy will be little more than a niche product or a fad. The transformation already has begun.


How Renewable Energy Will Change Geopolitics is republished with the permission of Stratfor.