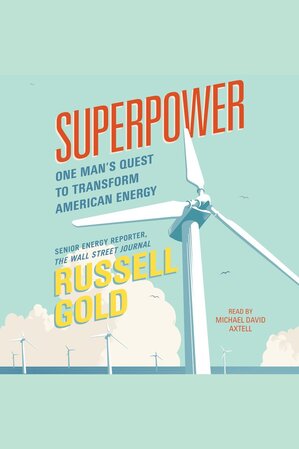 When Michael Skelly first visited the Oklahoma panhandle in the summer of 2009, he had a good idea of what he would find. He expected lots of sunbaked and windswept open space, and he wasn’t disappointed.

It was a hot day as he drove west from Guymon, the largest town in the panhandle, into a landscape that was pancake flat and dry. There were only a handful of trees. For mile after mile, the two-lane Highway 3 ran straight as a matchstick. Every mile, a dirt road intersected the highway and headed off toward the horizon at a 90-degree angle. The land was a giant grid containing squares of corn, milo, and grassland. There were few houses, one every mile or so. Half had been abandoned decades ago by homesteaders who gave up their fight with the elements.

Skelly didn’t want to fight the elements. He wanted to harness them.

​Gazing at the landscape, Skelly grew excited. He knew no place is perfect for energy development. But the panhandle was quite good. There was lots of room to build, thousands of square miles. Local landowners were supportive. No endangered animals lived there. You could build renewable energy here, he thought, on a scale that could change the country and maybe even the planet.

The wind rarely stopped blowing. A bestselling midcentury travelogue joked that homes here had a “crowbar hole . . . designed to check on the weather. You shove a crowbar through the hole: if it bends, the wind velocity outside is normal; if the bar breaks off, ‘it is better to stay in the house.’” A few years earlier, Skelly’s former employer, a wind farm developer, had erected a couple of needle-thin meteorological towers with instruments to measure wind speed. They were the tallest structures for miles around. The results were striking. The winds were strong and surprisingly steady. The data collected was good enough to go to a bank and get financing for a wind farm, but Skelly had never done anything about it. The region was too remote. Sure you could generate a lot of power, but then what? Where would it go?

​The sun was also relentless. On the giant interconnected power grid that runs from Nova Scotia, along Canada’s Atlantic coast, down to Miami and across to Montana, the sunlight is strongest in the Oklahoma panhandle and an adjacent area in New Mexico. If you put identical solar panels in the westernmost counties of Oklahoma and in Miami, you would generate one-third more electricity in the panhandle—and nearly twice as much as in Cleveland, Pittsburgh, or Albany. In the 1970s, the Guymon Daily Herald ran a box on the top left of the paper every day that proclaimed the city was the “Sunshine Capital of the World.”

At the time, Skelly was in his late forties. He was the human equivalent of a meteorological tower: slightly more than six feet tall and fit from years of biking to and from his office in Houston. Skelly had bushy hair and wore browline glasses. He was a departure from an earlier generation of wind farm builders and solar panel enthusiasts who were more interested in creating sustainable energy than sustainable businesses. Skelly wanted to make a profit, because profits would attract new investors and money into renewable energy.
The panhandle had a lot to recommend it as a place to build renewables. But there was a big drawback. No one nearby needed the power. Skelly planned to solve this problem by building a long extension cord: one end would be plugged into the panhandle; the other end would reach east until it crossed the Mississippi River. It would be the first of a set of transmission lines he wanted to build that would carry current hundreds of miles from one state to the next, stitching together the country and delivering low-cost, carbon-free electricity. He would upgrade the existing power grid, a century-old engineering marvel that tied together power plants burning a lot of fossil fuels. “It’s an environmentally reckless business model in need of reimagining,” he thought. Skelly dreamed of a new grid that could power modern society without contributing to the darkening cloak of carbon dioxide around the Earth.

Of course, such a grid would cost billions and billions of dollars. Skelly wanted to show it could be done, and done profitably. It was ambitious but necessary, he figured. “If we don’t do it,” he thought to himself, “who is going to do it?”
Russell Gold is an award-winning investigative journalist at The Wall Street Journal. Gold’s reporting has taken him to five continents and above the Arctic Circle two times. In 2010, he was part of the award-winning Wall Street Journal team that covered the Deepwater Horizon explosion and oil spill. His first book, The Boom, was longlisted for the FT Goldman Sachs Business Book of the Year prize in 2014.