The Dreamt Land:
Chasing Water and Dust Across California
by Mark Arax 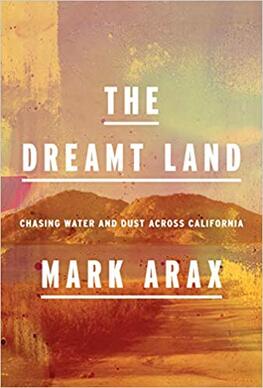 On a summer day in the San Joaquin Valley, 101 in the shade, I merge onto Highway 99 past downtown Fresno and steer through the vibrations of heat. I’m headed to the valley’s deep south, to a little farm¬worker town in a far corner of Kern County called Lost Hills. This is where the biggest farmer in America – the one whose mad plantings of almonds and pistachios have triggered California’s nut rush – keeps on growing, no matter drought or flood. He doesn’t live in Lost Hills. He lives in Beverly Hills. How has he managed to outwit nature for so long?

The GPS tells me to take Interstate 5, the fastest route through the belly of the state, but I’m partial to Highway 99, the old road that brought the Okies and Mexicans to the fields and deposited a twang on my Armenian tongue. Ninety-nine runs two lanes here, three lanes there, through miles of agriculture broken every twenty minutes by fast food, gas station and cheap motel. Tracts of houses, California’s last affordable dream, civilize three or four exits, and then it’s back to the open road splattered with the guts and feathers of chickens that jumped ship on the slaughterhouse drive. Pink and white oleanders divide the highway, and every third vehicle that whooshes by is a big rig. More often than not, it is hauling away some piece of the valley’s unbroken bounty. The harvest begins in January with one type of mandarin and ends in December with another type of mandarin, and in between comes everything in your supermarket produce and dairy aisles except for bananas and mangoes, though the farmers here are working on the tropical, too.

I stick to the left lane and stay ahead of the pack. The big-rig drivers are cranky two ways, and the farmworkers in their last-leg vans are half asleep. Ninety-nine is the deadliest highway in America. Deadly in the rush of harvest, deadly in the quiet of fog, deadly in the blur of Saturday nights when the fieldwork is done and the beer drinking becomes a second humiliation. Twenty miles outside Fresno, I cross the Kings, the river that irrigates more farmland than any other river here. The Kings is bone-dry as usual. To find its flow, I’d have to go looking in a thousand irrigation ditches in the fields beyond.
​
There’s a mountain range to my left and a mountain range to my right and in between a plain flatter than Kansas where crop and sky meet. One of the most dramatic alterations of the earth’s surface in human history took place here. The hillocks that existed back in Yokut Indian days were flattened by a hunk of metal called the Fresno Scraper. Every river busting out of the Sierra was bent sideways, if not backward, by a bulwark of ditches, levees, canals and dams. The farmer corralled the snowmelt and erased the valley, its desert and marsh. He leveled its hog wallows, denuded its salt brush and killed the last of its mustang, antelope and tule elk. He emptied the sky of tens of millions of geese and drained the eight hundred square miles of Tulare Lake dry.

​He did this first in the name of wheat, then beef, milk, raisins, cotton and nuts. Once he finished grabbing the flow of the five rivers that ran across the plain, he used his turbine pumps to seize the water beneath the ground. As he bled the aquifer dry, he called on the government to bring him an even mightier river from afar. Down the great aqueduct, by freight of politics and gravity, came the excess waters of the Sacramento River. The farmer commanded the distant flow. The more water he took, the more crops he planted, and the more crops he planted, the more water he needed to plant more crops, and on and on. One million acres of the valley floor, greater than the size of Rhode Island, are now covered in almond trees. 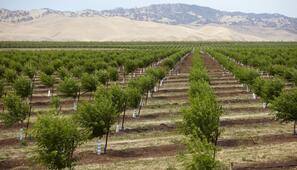 I pity the outsider trying to make sense of it. My grandfather, a survivor of the Armenian Genocide, traveled seven thousand miles by ship and train in 1920 to find out if his uncle’s exhortation – “The grapes here are the size of jade eggs” – was true. My father, born in a vineyard outside Fresno, was a raisin grower before he became a bar owner. I grew up in the suburbs where our playgrounds were named after the pioneers of fruit and irrigation canals shot through our neighborhoods to farms we did not know. For half my life, I never stopped to wonder: How much was magic? How much was plunder?
I’m going to Kern County, just shy of the Tehachapi Mountains, to figure out how the big farmers, led by the biggest one of them all, are not only keeping alive their orchards and vineyards during the worst drought in California’s recorded history but planting more almonds (79,000 acres), more pistachios (73,000 acres), more grapes (35,000 acres) and more mandarin oranges (13,000 acres). It’s a July day in 2016, five years into the dry spell, and the delirium that has gripped the growers, by far the biggest users of water in the state, shows no sign of letting go. Even as the supplies of federal and state water have dropped to zero one year and near zero the next year, agriculture in Kern County keeps chugging along, growing more intensive. The new plantings aren’t cotton, alfalfa or carrots, the crops a farmer can decide not to seed when water becomes scarce. These are trees and vines cultivated in nurseries and put into the ground at a cost of ten thousand dollars an acre to satisfy the world’s growing appetite for nuts and fruits.

Agriculture in the south valley has extended so far beyond the provisions of its one river, the Kern, that local farmers are raising nearly one million acres of crops. Fewer than half these acres are irrigated with flows from the Kern. The river is nothing if not fickle. One year, it delivers 900,000 acre-feet of snowmelt; the next year, it delivers 300,000 acre-feet. To grow, Big Ag needed a larger and more dependable supply. So beginning in the 1940s, Kern farmers went out and grabbed a share of not one distant river but two: the San Joaquin to the north and the Sacramento to the north of that. The imported flow arrives by way of the Central Valley Project and State Water Project, the one-of-a-kind hydraulic system built by the feds and the state to remedy God’s uneven design of California. The water sent to Kern County – 1.4 million acre-feet a year – has doubled the acres of cropland. But not even the two projects working in perfect tandem can defy drought. When nature bites down hard, and the outside flow gets reduced to a trickle, growers in Kern turn on their pumps and reach deeper into the earth.
I roll past Tulare, where every February they stage the biggest tractor show in the world, even bigger than the one in Paris, France. Past Delano and the first vineyards that Cesar Chavez marched against. Past McFarland and the Mexican boy runners who won five state championships in a row in the 1990s. Past Oildale and the boxcar where Merle Haggard grew up. Past Bakersfield and the high school football stadium where Frank Gifford and Les Richter, two future NFL Hall of Famers, squared off in the Valley Championship in 1947 in the driving rain. And then it hits me when I reach the road to Weedpatch, where my grandfather’s story in America – a poet on his hands and knees picking potatoes – began. I’ve gone too far. The wide-open middle of California did its lullaby on me again.

I turn back around and find Route 46, the road that killed James Dean. I steer past Wasco to the dust-blowing orchards and vineyards that rise out of the desert in Kern County, the densest planting of almonds, pistachios, pomegranates and grapes on earth. Down this road are the baronies of Marko Zaninovich, who once was and may still be the nation’s largest table grape grower, and the Assemi brothers, Farid and Farshid and Darius, who plant cherries and nuts when they’re not planting houses, and Freddy Franzia, who grows and bottles more wine grapes than anyone except the Gallos. His most popular brand, 450 million bottles and counting, is Charles Shaw, “Two-Buck Chuck,” which sells for $1.99 at Trader Joe’s. Up ahead is the kingdom of Stewart Resnick, the richest farmer in the country and maybe the most peculiar one, too, whose 120,000-acre empire of fruits and nuts is called Wonderful. His story is the one I’ve been carting around in my notebook for the past few decades, sure I was ready to write it after five years or ten years, only to learn of another twist that would lead me down another road.

I park the car and start walking. The sun’s brutal beat reminds me of my grandfather pouring salt on his watermelon, an old farmworker trick to ward off sunstroke. I keep walking until I find myself straddling one of those divides that happen in the West, and maybe only in the West. Behind me, the hard line of agriculture ends. In front of me, the hard line of desert begins. In between wends the concrete vein that funnels the snowmelt from one end of California to the other. I have found Lost Hills, it would seem, but like so many other optical illusions I’ve followed along the thousand-mile path of bent water and reborn dust, the hills are not hills.
Mark Arax is an author and journalist whose writings on California and the West have received numerous awards for literary nonfiction. A former staffer at the Los Angeles Times, his work has appeared in The New York Times and the California Sunday Magazine. His books include a memoir of his father’s murder, a collection of essays about the West, and the best-selling The King of California, which won a California Book Award, the William Saroyan Prize from Stanford University, and was named a top book of 2004 by the Los Angeles Times and the San Francisco Chronic