The Fate of Food:
What We'll Eat in a Bigger, Hotter, Smarter World
By Amanda Little 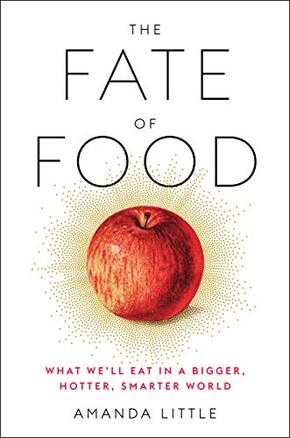 ​
​This book grew out of some seeds I planted in my backyard garden in April 2013. The diehards among you may recognize that previous sentence, which echoes a line in the introduction to Michael Pollan’s classic The Botany of Desire, a book that inspired garden lust in me and many other readers. But my seeds and Pollan’s yielded different results. His bourgeoned; mine bombed.

​First, they sprouted and, as seeds miraculously do, grew to be fifty and a hundred times their original size. They produced glossy green leaves and the advanced stages of fruit before things took a turn. The garden had been partly my idea, partly my kids’. They’d been raising herbs and cherry tomatoes in planter boxes on their school playground, and wanted to try it on a larger scale at home. It didn’t take much convincing—I’d already read not just Pollan but also Mark Bittman, Dan Barber, Alice Waters, et al. I’d drunk down the all-natural, agave-sweetened, anti-Kool-Aid Kool-Aid. Tending our own backyard plot would slow down the rhythms of life a bit, my husband and I agreed, improve our daily vegetable intake, and offer an iPad antidote while creating a deeper bond with nature. And hadn’t I read somewhere that bonding with nature helped kids focus and improved hypothalamus activity? And family unity! This would be a good, healthy, mind-expanding, family-unifying, money-saving, world-bettering weekend activity.
Nashville, Tennessee, is a far cry from Berkeley, California, but our community teems with acts of world-bettering, especially among parents and especially in relation to food. We have expanding populations of backyard farmers and vegans and Paleolithic dieters and people who raise their own chickens. I have good friends who would rent an ox and a Mesopotamian plow to get closer to the ancient roots of their nourishment if they could, so deep is their food nostalgia. I am nowhere near this serious about my own family’s diet. I love a good farmers’ market, but I mostly shop at my local Kroger and have no qualms about feeding my kids out-of-season fruit or, for that matter, the public-school lunch. We buy organic when we’re feeling flush, which means we often don’t, and we go through at least half a dozen mass-produced apples a week—the kind of fruit dismissed by critics as over-engineered sugar bombs. Still, I’m prone to nostalgia for a time before industrial agribusiness, for the bygone era of heirloom flavors that farmers’ markets and backyard gardeners are trying to protect.

So that spring of 2013, we went all in, sinking hundreds of dollars into a fenced-in ten-by-fourteen-foot raised bed, a small mountain of compost, tomato cages, fish-oil fertilizers, and crates of organic and heirloom seedlings, only to discover that I’m the gardening equivalent of tone-deaf. Two months after planting day, I stood inside my chicken-wire fence, scanning the wilting husks of half a dozen once promising cornstalks, a patch of elephantine cucumbers, one the width of a raccoon, and an aphid infestation in five tomato plants that had merged into a unified organism. The evidence was clear that I’m no better suited to growing my family’s food than I am to repairing a circuit board. An idea that had originally seemed eminently practical—a twenty-first-century victory garden—proved, for our family at least, to be not very practical.
And it turned out that first garden had managed to be generative—not of food but of questions, such as: How will we fix a failing food system if we can’t necessarily rely on a critical mass of enlightened, vegetarian, non-GMO, organic-only, backyard-harvesting consumers to do so from the ground up? It also got me exploring the history of agriculture and the technologies that have transformed it along the way. I learned that the food-growing efforts of individual producers have been riddled with hardships and impracticalities since, well, the beginning of human civilization.

​....
​
The year is 4000 BC, and we’re not too far from present-day Baghdad. A Mesopotamian farmer is growing wheat on a farm located somewhere between the Tigris and Euphrates rivers. He (or maybe she) is hitching an animal to a tool that looks a lot like a hoe but is really a protoplow. At this point, humans are about six thousand years into food cultivation, and there’s no consensus theory (six millennia later, there still isn’t) to explain how and why we made the move as a species from plant-gathering to plant-taming. But if you asked her, this wheat farmer might tell you it’s simple—because her family liked staying put. (Or maybe her kids, like mine, came home one day wanting to plant what they’d seen growing.)

There’s little dispute among archaeologists that farming made it possible for settlements, and ultimately for civilizations, to thrive over time. But there’s also evidence that many settlements predated farming. There were religious sites with temples and permanent dwellings established long before the first cultivated crops appeared. Places such as Pikimachay in western Peru and Gobekli Tepe in eastern Turkey were located, circa 10,000 BC, near fishable rivers or in regions where the food supply was easy pickings. Wild sources of grains, fruits, and protein were abundant and reliable—until they weren’t. A drought or blight may have come along, or the populations outgrew the wild food supply, and the settlers had to find ways to make do with whatever edible plants remained.

We’ll probably never know who pushed the first seeds into the soil and tended those original harvests, or exactly why, but it’s clear that by the time we got to prehistoric Mesopotamia, humans had by and large decided that it’s better to grow than to gather what you need. We stopped wandering the natural world and began to shape it. Migratory lifestyles gave way to settled societies. Ancient economies began to form. Fertility rates shot up, and populations expanded. Larger families were easier to care for when you weren’t constantly on the move, and more offspring meant extra hands in the fields.
​But as houses were built and populations soared, nutrition declined. Farming radically narrowed the diversity of available foods. Foragers had subsisted on a varied, protein-rich diet, but now farmers were living off of whatever limited monocultures of grain they could produce. Bioarchaeologists have found lesions on the skulls of the settlers in early farming societies, indicating severe iron deficiencies, along with evidence of stunting from poor nutrition. The first farming populations were almost invariably shorter than their hunter-gatherer predecessors and more vulnerable to disease. They dealt with longer and more grueling workdays. Farming required land clearing, hoeing, planting, weeding, warding off pests, harvesting, storing, and distributing the food—more calorie-intensive labor than gathering wild bounty.

Drudgery and hunger provided a motive for developing tools. The Columbia University historian Ruth DeFries explains it this way: “Every new agricultural tool introduced since the first farming settlements has been designed with the same goal: to coax more food from the earth with less human effort.” This is useful context as we consider how we’ll feed a hotter, more populous world in the coming decades. Humans have now spent the better part of ten thousand years developing a succession of tools to this end, all of them temporary solutions that, generation after generation, get replaced or upgraded to work on larger scales.
Amanda Little is a professor of journalism and Writer-in-Residence at Vanderbilt University. Her reporting on energy, technology and the environment has taken her to ultra-deep oil rigs, down manholes, and inside monsoon clouds. Amanda's work has appeared in the New York Times, Wired, Rolling Stone, Vanity Fair and elsewhere. ​