Tesla Vs. Edison and the War of the Currents
by Frani Halperin
​In the late 1800s there was a battle raging. It wasn’t over territory, ideology, or settling old grudges. It was a clash over how we – and for that matter the world – were going to get our energy. Although the ability to generate electricity had been established, just how to deliver it to the masses – primarily for the purpose of lighting – was still unanswered. It was a contest that about a century later inspired a rock band to name itself “AC/DC.”
​Suffice it to say there was a lot at stake over which system was going to electrify the nation, and at times it got a bit ugly with Edison launching a propaganda campaign – what today we might call “fake news” – by doing things like electrocuting animals with AC to try to prove its dangers. Tesla meanwhile had teamed up with entrepreneur George Westinghouse, who saw electrification as an enormous business opportunity and had purchased Tesla’s patents.

This high stakes war ended with a victory in, of all places, Telluride, in southwest Colorado. Back around 1885, mines were a huge industry in the state, but they were starting to fail because they lacked a power source to operate. Nearby forests had been cleared for fuel and the cost to bring in coal by burros was too expensive. The Gold King mine above Telluride (not to be confused with a mine of the same name near Durango, which had the devastating spill into the Animas River a few years ago), had a lot of ore left in it, but production costs were getting too high to make it feasible.

The Telluride mine also had a river nearby – a fork of the San Miguel. A man named Lucien L. Nunn, who was a major investor at the time, thought it would be a perfect source of hydropower – if only they could get the electricity transmitted the two miles up the mountain to the mine. So Nunn approached Westinghouse to try out Tesla’s idea for alternating current. 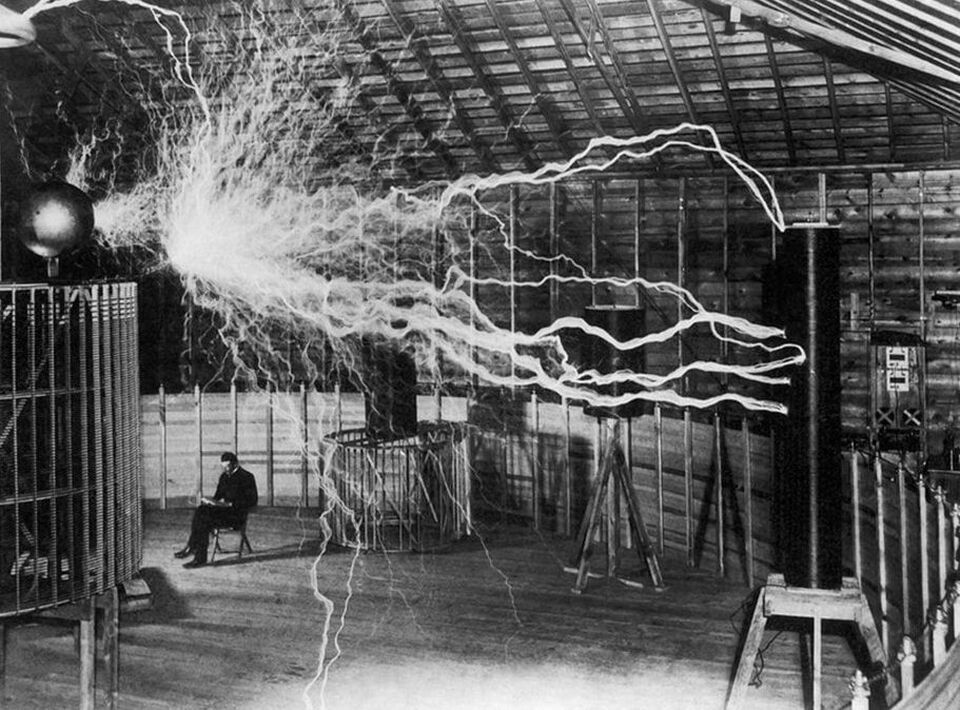 Nikola Tesla in his laboratory in 1899. Tesla’s alternating current (AC) electricity distribution won the first round of the current wars
Tesla himself did not come to Telluride. Westinghouse sent a team of engineers to Colorado to build the Ames Hydroelectric Plant based on his designs for the generator and induction motor. On the 19th of June 1891, they flipped the switch and sent electricity along newly constructed transmission lines up to the Gold King, which was at 12,000 feet in elevation. The engineers were so amazed – and nervous that it worked – that they didn’t turn it off for thirty days. When they did turn it off – and turned it back on – it continued to work, and the Ames plant made history as the first hydroelectric facility to generate and transmit alternating current for industrial purposes in the U.S. The success at Ames proved that AC was a viable option, and, shortly after, the same design of the plant was built on a much larger scale at Niagara Falls.

Lucien Nunn went on to install similar systems at other mines and eventually provided electricity to Telluride – making it the first town in the country to be powered by alternating current. The Ames hydro plant runs to this day and is owned and operated by Xcel Energy. Mychal Raynes, a plant specialist, says it’s only needed a few improvements and otherwise is still using the original equipment.


Directly Back to the Future?

So the rest was history and alternating current won. Or did it?

As Stephen Frank, a research engineer with the National Renewable Energy Laboratory (NREL) near Golden, Colorado, explains, a home built in the 1950s would probably have all its fixtures and appliances running on alternating current. But that all changed with the advent of the transistor in the 1950s, which opened the door for power electronics that help convert electricity for use in numerous devices we use today. Pretty much everything in a modern home—from computers and televisions to lights and washing machines—are all using direct current because of the electronics inside. That white cube that plugs into the wall to charge your phone? It’s a power electronic converting AC to DC.

But every time these conversions happen energy is lost in the form of heat – something undesirable in the middle of summer. And given that you might use an air conditioner to cool down a building warming up from multiple appliances, conversions are wasting electricity.
​Changing the grid itself is not something that would happen in the near term, but finding places to increase efficiency is the focus of much research. However, right now if someone wanted to design a new building to run completely on direct current, it would be challenging because they can’t go down to a home improvement store and pick up a DC outlet. The marketplace isn’t there yet. Frank says in order for there to be a change, standards need to be developed about everything from the shape of outlets to how to reuse AC wiring.

The bottom line about whether DC is the right choice for a new building Frank says, depends on a lot of factors: the availability of products, electricity rates, and capital cost of the equipment – many factors that don’t have anything to do with efficiency difference between the two systems. All factors have to be considered in order to make an informed choice about which system is best on a case-by-case basis.

But there may be a very compelling reason to incorporate more direct current into the grid – the surging sales of electric vehicles (EVs) that need charging stations for their batteries. “Vehicle diversification is happening rapidly,” says Greg Martin, an electrical engineer who works at the energy systems integration facility at NREL, and that raises several questions: What is the impact to the grid? Where does it make sense to do the conversion to DC? If you want to rapidly charge your car in five minutes you really want to be hooked up to a DC charging system. Martin adds that in light of trends in transportation there’s a question about to what extent do we want to generate and distribute DC to support it. “These are topics in research right now as we speak.”

The ubiquity of power electronics and the trend toward EVs is a twist that should make fans of Edison smile – if not feel some vindication. As Frank says wryly, “I find it deeply ironic that an electric car using battery storage and charging with fast DC chargers has Tesla’s name on it.”
This article was first published by H2Oradio.org on March 22, 2019, and is republished with permission.