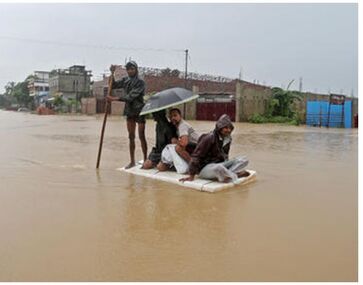 ​The annual return of the Asian monsoons is one of nature’s great cycles of renewal. Each summer, the onset of the wet season brings much-needed rain to millions of people across the continent. But scientists have noticed a puzzling trend in recent decades. Some of the monsoons, including the annual rains in India and parts of China, seem to be weakening over time, raising concerns about the long-term effects on water supplies and agriculture. It’s the exact opposite of what should be expected in a warming world.

​​On a basic level, the monsoons are caused by a difference in temperature between the air over the Asian continent versus the surrounding oceans. This gradient changes with the seasons, and allows for an influx of warm, moist air to blow across the land during the hotter summer months. That brings stormy weather. As the climate warms, land masses are expected to heat up faster than surrounding waters, strengthening the monsoon season in the process. But some are getting weaker, and now scientists think they know why.
Research increasingly suggests that rising air pollution in parts of Asia is powerful enough to alter the weather—sometimes in ways that work against the influence of global warming. The result is a kind of tug of war between greenhouse gases and pollution particles in the atmosphere. And for now, when it comes to the annual monsoons, pollution seems to be winning. A recent study published in the journal Geophysical Research Letters is the latest to highlight the phenomenon. It focuses on the Asian summer monsoon, which brings annual rains to large regions of China.
​The major mechanism likely involves the cooling influence of certain types of aerosols, particularly sulfate particles, according to study co-author Steven Leavitt of the University of Arizona. “The sulfate particles turn out to be quite reflective to sunlight,” he noted – meaning they beam sunlight away from the Earth, causing a cooling effect on the local climate. This cooling effect works against the influence of climate change, dampening the warming that’s occurring over the continent and causing the monsoon to weaken.

The research reaffirms an idea that many other studies have also suggested, according to climate and monsoon system expert Andrew Turner of the University of Reading in the United Kingdom. “Modelling studies consistently show that aerosol emissions over Asia, and in particular sulphate aerosol emissions, lead to reduced monsoon rainfall,” he noted, adding that the effect isn’t limited to northern China. Multiple studies have pointed to a similar phenomenon affecting the South Asian summer monsoon, as well, which brings rain to millions of people across the Indian subcontinent. Observations suggest that the South Asian monsoon has also weakened in recent decades. And as with the rains in northern China, models indicate that aerosols are likely a major factor.
That’s not to say there aren’t remaining mysteries about the behavior of the Asian monsoons. The East Asian monsoon has exhibited some perplexing trends in recent years, according to atmospheric physicist Yi Ming of NOAA’s Geophysical Fluid Dynamics Laboratory. Some of Ming’s own modeling studies have suggested that the influence of aerosols over the Asian continent should be driving a drying trend over southern China, similar to northern China and the Indian subcontinent. But real-life observations show that it’s actually growing wetter, he said in an interview. Scientists are still working to understand the discrepancy, but many believe that certain natural climate variations may be part of the reason.

On the whole, though, research increasingly points to the acute influence of air pollution on monsoon systems affecting broad swaths of the Asian continent.

A GLOBAL PHENOMENON
​Scientists are becoming more aware of the profound ways in which air pollution can affect global weather and climate patterns, and the ways in which they may work with or against the influence of climate change. Different types of pollutants may have different effects in the atmosphere—black carbon particles, for instance, can actually absorb heat and increase climate warming. But the cooling influence of particles like sulfates has proven among the most globally significant effects so far.

Recent studies suggest that air pollution may be masking some of the influence of climate change, so to speak, and that the climate would be significantly warmer if it didn’t exist. One particularly jarring 2018 study estimated that eliminating all human aerosol emissions could cause the planet to warm by as much as an additional half to 1 degree Celsius.
On a smaller scale, research suggests that some air pollution particles may also be able to affect the weather by altering the formation of clouds. That’s even more complicated. Depending on the types of particles and their concentrations in the air, studies have found that pollution can sometimes enhance rainfall and sometimes suppress it. Still, the effect on clouds has had some globally significant consequences. One oft-cited 2014 paper, for instance, found that pollution from Asia may be strengthening storms in the Pacific Ocean—including weather systems that eventually make it all the way to North America—largely by altering the formation and structure of clouds.

On the other hand, some of the weakening trend in the Asian monsoons may actually be linked to the opposite process, according to Wenju Cai of Australia’s Commonwealth Scientific and Industrial Research Organisation, one of the new paper’s co-authors. Some types of aerosol particles over the continent may actually work to decrease the size of water droplets in the storm clouds, which he notes is “not conducive to rainfall.”

That’s one of the complicated things about air pollution—there’s a wide variety of different particles released into the atmosphere, and they don’t all behave in the same ways. That makes modeling their effects on already complicated aspects of the Earth system, like weather and climate, a big challenge.

What may be an equally important question is what will happen to global weather and climate patterns if air pollution goes away.

Despite the variety of different particles and their behaviors, it’s clear that the climate-cooling properties of some of the most common aerosols remain among the most significant global consequences of air pollution around the world. Currently, that effect is working at odds with the progression of global warming. But aerosols only last a short time in the atmosphere compared with carbon dioxide and other greenhouse gases, and they disappear quickly when emissions are halted. Some scientists have pointed out that as efforts to clean up the air become more successful, it could be followed by rapid climate warming. And that extra warming could bring about a spate of unforeseen changes in regional weather patterns, as well.

Recent patterns in Atlantic hurricanes may hold some hints about the potential future of the Asian monsoons, Ming suggested. While climate change is expected to increase the strength of tropical cyclones, some research has also suggested that recent reductions in air pollution from North America and Europe may have removed some of the cooling influence of aerosols over the Atlantic Ocean. This cooling effect may have been suppressing storms during much of the 20th century, and recent clean-up efforts could partly explain why hurricanes seem to be growing stronger over the last few decades. “In that sense, this is also like an anecdote, or somewhat preview, of what’s to come over East Asia,” Ming suggested.

Widespread concern about air quality across Asia, particularly China and India, may eventually result in similarly successful efforts to reduce pollution. When that happens, the weakening trend in the monsoons may begin to reverse itself, particularly as the climate continues to warm. That might seem like a good thing for water availability across the continent. But there are two sides to every coin, Ming noted. Monsoon season is often associated with sudden severe storms, as opposed to just continuous rainfall. If the monsoons strengthen, there may be an increase in flooding and storm-related damage.

Researchers have frequently emphasized that it’s important to improve air quality despite the potential climate side effects. But they would like to project the outcomes on warming before they occur, so there’s time to prepare. And that starts with science aimed at understanding how air pollution is affecting the climate system now, and in what ways it’s working with or against the continued progression of climate change. “If our past understanding is right, that means you will have this unmasking of the aerosol effect—so that means everything will be reversed,” Ming said of the monsoons. “So that is not a tug of war anymore between aerosols and greenhouse gases. They will all be working in concert toward the same direction.”

This ​article has been republished with permission from E&E News. E&E provides daily coverage of essential energy and environmental news at www.eenews.net.

Chelsea Harvey covers climate science for Climatewire. She tracks the big questions being asked by researchers and explains what's known, and what needs to be, about global temperatures.