Water, Energy and Food Security Is More Complex Than You Think
by Enda Hayes 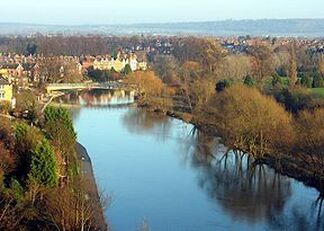 The Severn River, Maryland
The total global population is increasing and is expected to reach 9.6 billion by 2050, with an estimated 70% living in towns and cities. These trends of population growth married with rapid urbanization and rising living standards are placing increasingly competitive demands upon finite natural resources for agriculture, energy and industrial production. If these trends continue, by 2050 water demand is projected to increase by 55%, energy demand is projected to increase by 80% and food demand is projected to increase by 60%. The main consumers of electricity, oil, food, beverages, household appliances, cars and other goods and services will be the expanding global middle classes, suggesting an increasing and disproportionately large demand for nexus services.

​There is a growing appetite for integrated thinking and resource management, including an emphasis on the need to integrate economic, social and environmental concerns in economic development while addressing food, water and energy security challenges without detrimentally affecting our natural environment. But future projections place more demands on an increasingly stressed planet with limited resources while taking on board equitable distribution of benefits, illustrating the urgent need for systems or nexus thinking.
What is the Water-Energy-Food-Nexus?

The nexus concept specifically referencing interlinked natural resource use originated in 1983 with the Food-Energy Nexus program of the United Nations University, which sought to better understand food and energy challenges in developing countries. In recent years, the concept generated traction in response to the 2008 global economic crisis and has increasingly been promoted as a global development paradigm and research agenda. However, while the water-energy-food nexus is all around us, it is rarely seen, considered or understood by the public or indeed by some policymakers. In most cases, this is because of the sheer complexity of the nexus, but also due to the fact that the connections are often indirect and at scales of influence beyond the immediate “sight” of consumers and decision-makers.

The water-energy-food nexus is best illustrated by something that we take for granted in our daily activities: a cup of tea. Our cup of tea has a large, complex and diverse suite of nexus of impacts through embedded energy pathways and its physical and “virtual” water content. For example, we need energy to treat (purify), distribute (pump) and boil water; energy needs water for thermal electric cooling, hydropower and the creation of fuels (e.g. biofuels or shale gas); and water is an essential component of our food systems through the irrigation of crops (tea growing) and animal consumption (milk production), while energy is essential in the processing, transport, product use and waste.

On a global scale, the nexus—a connection or series of connections linking two or more things—considers water, energy and food as its core components, but the wider implications include land-use planning, human health and environmental/ecosystems protection. The challenge of nexus thinking is not just from the interdependent relationships between water–energy–food but also involves the complex planetary drivers, pressures and challenges that influence these resources on different geographical scales (local, national, global), temporal scales (historical, current, future) and experiencing differing risks (political, economic, climate change).

A cynic could be forgiven for thinking that that the nexus concept is predominantly driven by the water agenda, embraced by the food agenda, but only tolerated by the energy agenda, i.e., a shared priority certainly does not mean an equal priority. The reality is far more multifaceted, and it is vital to consider the nexus within the context of the subject and the geography being assessed. For example, the Middle East may be energy “rich” but water “poor,” and as such the push toward desalination technologies and the emphasis on water and food security is understandable, even considering the impact desalination can have on local ecosystems through the discharge of brine into oceans and estuaries.

Conversely, the United Kingdom could be considered water “rich” but energy “poor,” resulting in the recent political push toward shale gas exploration, which may have an effect on water availability and quality. However, the perfect nexus-friendly solution does not exist. There will always be some element of trade-off required, but a number of good, no-regret solutions that allow for benefit-sharing may have to be enough.

The Nexus in Action

Defining a boundary or definition for the water-energy-food nexus is challenging and, many might argue, unnecessarily restrictive going against the nexus concept of being cross-sectoral and multi-disciplined. At national levels of influence, fragmented sectoral responsibilities coupled with inconsistent policies and regulatory frameworks can lead to misjudged initiatives.

However, nexus thinking within specified systems boundaries must often be nuanced by local context. For example, a regulatory body interested in water management and quality may focus its nexus thinking at the river-catchment level, while an energy or agricultural system abstracting water from that river catchment may limit its interest to the immediate vicinity of abstraction rather than the whole river catchment. This can be best illustrated using the example of the Severn River Basin in the UK.

The Severn River catchment and estuary supports 5 million people, including the major urban areas of Coventry, Cardiff and Bristol. It supplies water for approximately 2 million households and 193,000 commercial operations, but the basin is already under significant nexus pressures including: population growth and associated demands (forecast to increase by 24% by 2050); intensification of agriculture; increased water demand from population and industry; abstraction uncertainty; and the impact of climate change as exemplified by recent flooding during winter 2013-14.

The British government in recent years has had a notable political emphasis on energy security making the Severn catchment and estuary strategically important for its low carbon power generation potential through a number of probable and possible technologies. For example, nuclear power proposed at Hinkley Point C in Somerset, an £18-billion nuclear power station providing 3.2GW of power aiming to be operational around 2025; Severn estuary tidal power schemes utilizing the estuary’s high tidal range (second highest range in the world) such as the proposed Tidal Lagoon Swansea Bay that projected a nominal capacity of 240MW; and shale gas exploration, often described as a low carbon “transition fuel,” the Severn catchment has shale gas reserves available under approximately 50% of the catchment.​
Nuclear power has environmental concerns around localized drawdown of groundwater and possible contamination during construction, possible flooding of access roads and increasing future risk for local properties, marine ecological impact from the thermal plume associated with cooling water discharge, and the loss of the terrestrial ecology associated with the loss of Hinckley County Wildlife site and flower-rich calcareous grassland. The tidal power schemes may, depending on which combination of proposals is eventually realized, negatively impact the ecosystems of the estuary, including fisheries, and create a lagoon system of unknown environmental conditions. The proposed UK energy policy is responsive to the need for a low-carbon society, but has not cumulatively considered the links between water, energy and food security or the possible impacts of climate change on the proposed actions.

More worryingly, the immediacy of the thinking and planning around these proposed projects is often siloed, with each project being considered on its own merits and a lack of oversight assessing the potential cumulative impacts of these projects across the whole catchment and estuary in the future.

People in the Nexus

The emphasis on the supply and demand management of our resources and the subsequent impacts too often focus on technological challenges and solutions which can lead to a bias in policy that concentrates on managing resources through technological change without considering human behavior. People and their daily activities, behaviors and practices are often missing from the nexus debate, resulting in an over-reliance on technological innovation rather than social innovation and insufficient consideration given to how we can change the way our societies and cities operate and function.

Our future cities, citizens and their demands will be unlike what they are today, therefore, to truly understand how to meet our nexus challenges in our cities, we need to consider what, when and why our city-citizens use water, energy and food and understand how end-uses are changing. The answer to these questions can lead to a better understanding of the nexus at both point of production and point of use, while also providing a clearer delineation of city-citizen ownership and responsibility to both nexus challenges and, more importantly, nexus solutions. As previously discussed, defining the boundary or definition of the nexus is challenging, but perhaps the most appropriate conceptual nexus boundary relates to a social-ecological system which considers people’s behavior and demands related to our ecosystems and the services it provides, rather than rigid geographical boundaries such as river catchments or boundaries related to specific technologies.

The nexus also needs to be contextualized within the debate around environmental justice and the emerging understanding of social inequity related to differing strands of the nexus. Concepts such as energy decadence (the profligate use of energy where wealth and circumstance allow high energy consumption through choice) and food/water poverty indicate the presence of a strong relationship between levels of poverty and levels of resource consumption—resource consumption and resource availability decreasing as poverty indices increase. These inequalities increase the pressure and importance of stakeholders making informed and balanced choices not only on our natural resources, but also in working toward the achievement of the Millennium Development Goals and the more recent Sustainable Development Goals.

The question remains how do we provide nexus security for a growing population now and in a future that needs flexibility to adapt to a challenging and changing climate? Do the shared priorities of the different nexus strands have to be equal priorities? What, if anything, are we willing to accept in trade-offs to achieve one security over another insecurity?

There is no quick-fix solution. Rather, what is required is to start thinking outside of our “silos,” not just about a low-carbon future, but a nexus-friendly future—a future with shared ownership not only of nexus security challenges but, more importantly, the solutions and the impact that individuals’ choices can have on our stressed global systems.