Qatar to Saudi Arabia:
We'd Rather Quit OPEC Than Cut Ties With Iran or Close Al Jazeera
by Jim Krane
Natural gas exports have allowed Qataris to become the world’s richest people. They’ve used that income to extract themselves from historic dominance by neighboring Saudi Arabia, OPEC’s de facto leader. Qatar’s quest for autonomy in the Gulf is crucial to understanding its withdrawal from OPEC, which is based on two important factors.
​
First, Doha appears to have abandoned the cartel because of the long-running feud between Qatar and neighboring countries, led by OPEC mainstays the United Arab Emirates and Saudi Arabia. Over the years, the Saudis have tried to bring wayward Qatar to heel. In 1996, Riyadh backed a failed coup attempt. Since June 2017, Riyadh joined the UAE in imposing a trade and travel blockade on the maverick monarchy. The embargo has failed to achieve a single one of its strategic goals, which include cutting links with Iran, the country with which Qatar shares its primary natural gas field, and shutting down Al Jazeera.
The second driver of the Qatari departure is the fact that OPEC itself is changing in ways that have sidelined small oil producers like Qatar. That’s because the shale revolution that turned the United States into the world No. 1 oil producer has diluted OPEC’s market power. The cartel now finds itself with too little clout to move oil prices unless Russia cooperates. Small states like Qatar, which produces just 600,000 barrels of oil per day – less than half of the output of the Eagle Ford shale play – no longer matter.
“OPEC … has become useless and does not bring us anything,” said Qatar’s former Prime Minister Hamad bin Jassim al-Thani. “It is just being used for purposes that harm our national interest.” 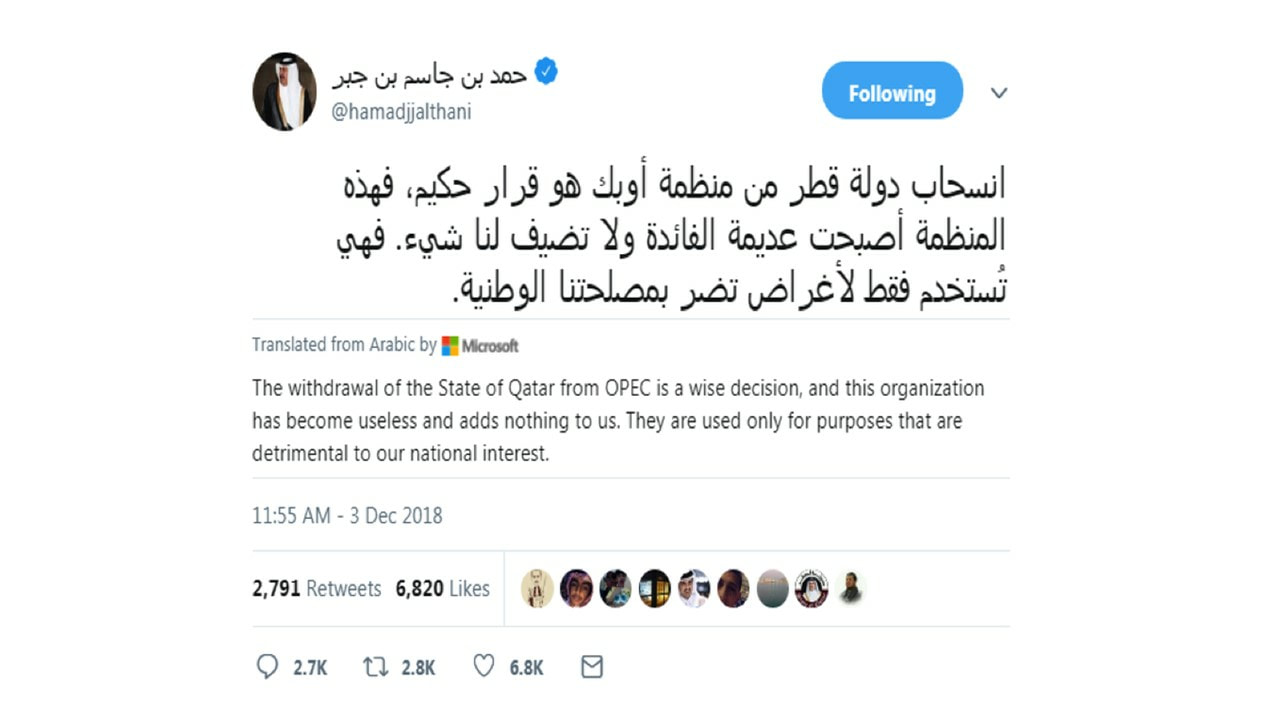 Tweet by former Qatari prime minister Hamad bin Jassim al-Thani Dec. 3, 2018(JK)
But quitting OPEC could actually backfire on Doha. It could expose Qatar to accusations of “free riding” on output cuts by members, especially those of Saudi Arabia, which almost always carries the heaviest load. Given that possibility, Qatar might agree to voluntary cuts in line with OPEC, to demonstrate that its departure has little to do with an unwillingness to accept its share of the burden.

Finally, leaving OPEC is a contrarian move for a small country, and one that signals a high level of self-confidence. Most small states seek to join international organizations as a way to increase their geopolitical reach. OPEC allows little-heard leaders from members like Gabon, Equatorial Guinea and Ecuador to share the stage.

Qatar’s departure shows that the tiny monarchy no longer needs OPEC to make itself heard. For that, it’s got Al Jazeera.